During our loud, loving holiday festivities I marveled at how quickly the family sorted itself into age groups.

The old folks sat at the kitchen table, reminiscing as usual. The millennials gathered around the dining room table, loudly sharing stories and glasses of wine. The children and grandchildren sat in a corner of the family room in silence, each hovered over a tablet. As usual, I sat with the children, entranced by their single-minded devotion to a device that was placed in their hands by frazzled parents.

They remind me of my students, sixth graders in an exurban middle school in Northern California. My nieces and nephews, much like my students, have grown up with tablets that serve only one purpose – entertainment. They have a mindset toward mobile technology that has been hardened by years of daily use. According to a study released in 2019 by the American Medical Association, children under the age of two spend about 3.05 hours per day interacting with a screen. Children aged three through five, spend 2.47 hours per day, a statistic tempered by preschool. More than 50% of teenagers self-report that they spend five or more hours per day on a device.

For the purposes of this blog, one in a yearlong series focused on my return to the classroom after 15 years atop the management structures of the Buck Institute for Education and the Partnership for 21st Century Learning, I am less concerned with screen time than I am with mindsets toward technology.

When I made the decision to return to the classroom I looked for a middle school that served underprivileged children with a mix of technology and project-based learning (PBL). The school where I work uses Google Classroom for content management, PowerSchool as a Student Information System, and Apple Classroom for mobile device management. We have a design studio and library equipped with high-end Macs. Two roving carts of Chromebooks are used for coding. Each student receives an iPad they bring to and from school.

I quickly realized that my students had a monocular view of the tablets. The first thing they did when they received the devices was to download (and play) as many games as possible. The students are firmly held by the entertainment mindset when a tablet is placed in their hands. I routinely use Apple Classroom to gain an overview of how students use their devices during instructional breaks. Minecraft, Roblox, and Tik Tok dominate the usage reports.

Almost immediately I began to gather data on how students use the devices for productivity, looking to promote the completing mindset. In any given week, less than 20% of my students complete their work and submit it online through Google Classroom. Overwhelmingly, they prefer to complete their assignments on paper.

Rather than make assumptions, I conducted focus groups with my students to discover their usage patterns. These are the most consistent responses:

This last response is in accordance with the thesis of this blog. My students have an entertainment mindset toward mobile technology. It’s 2020 yet many of them find paper to be the most efficient productivity tool.

After I engaged my students in focus groups I held one-on-one interviews with several of them. The answers didn’t vary from the group responses, but the interviews did generate a question I plan on wrestling with for the remainder of the year, “Do students underachieve because they are distracted by technology or are underachieving students innately distracted by technology?”.

My challenge as a teacher is to change mindsets, a task amply explored by Carol Dweck and Angela Duckworth in another setting. Some of the strategies I suggest are systemic because technology mindsets are in part driven by systemic causes:

Ultimately, do I really blame my students for their mindset toward mobile technology? Both of my sons were home from college this past weekend. They pulled out their laptops when they needed to complete assignments for work or school, but when they wanted to play games or watch YouTube they closed their laptops and turned on their tablets. My wife and I do the same.

Maybe the key is “code-switching,” choosing the right tool to fit the purpose and task. If that’s the case, schools may be making a mistake with the widespread distribution of tablets in the upper grades. What do you think? Show What You Know: The Shift to Competency 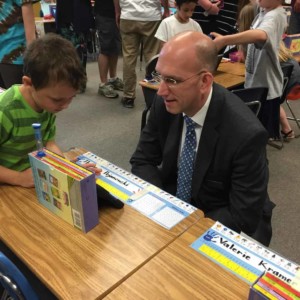 Great article. I agree with you.

There may be one more thing to take a look at...

If you give any person on the planet a Chromebook, iPad, and a smartphone, the only device they will never put down is the smartphone. "They never leave home without it." They have it on them at all times (except when school districts remove smartphones by force). Students practically text more words in a month (on a smartphone) than their grandfathers' wrote in a year in Word.

When elementary and secondary school students want to look something up on Google (on their own time), virtually none of them use a laptop or tablet... they use their smartphones. When they use tools like speech-to-text (allowing them to get their thoughts written down 3 to 5 times faster than texting or typing) they do so via their smartphone. Students already know what tools work best for them in different scenarios. It's just that they are not allowed to use what they want or they are not aware of applications that work the way they're wired.

I'm not entirely surprised to hear the results you've seen. Students don't want to use their grandfathers' technology (Word, Google Docs, Evernote, One Note). They may be forced to use these apps on Chromebooks and tablets in school, but they won't use them for self-learning. They want more flexibility to develop their thoughts than any of these tools can provide.

Students are naturally curious. They want to learn, but they want applications that work the way they're wired on any device, in any scenario, that they are inclined to use both now and in the future.

By the way, the fact that students prefer paper over digital technologies might be proof that Microsoft, Google, and Apple offer little in the way of efficiencies for the 21st-century mind.