It was 50 years ago this spring that LBJ, in just his first year as president, announced during a college commencement address his plans for what became known as “The Great Society.” One of its major planks was America’s cities and their troubled schools.

It is jaw-dropping that half a century–and billions of dollars and endless reforms–later we still don’t have a single high-performing urban school district. Remember, JFK, in 1961, had challenged the nation to send a man to the moon and bring him home safely within a decade…and we did it just eight years later. This nation can accomplish unbelievable feats, but only if it is willing to be bold.

If we want to truly revitalize our cities, we have to dramatically improve K12 urban schooling. If we’re to dramatically improve K12 urban schooling, we have to end the traditional district’s tenure as the dominant, default delivery system of public education. It is hard to name a government structure that has so consistently failed at its core responsibility for so long and so badly.

Our attention must focus on the district apparatus–the central administrative unit that owns and operates scores of schools, controlling virtually every aspect of their daily functioning. It is this organization that has proven itself completely unable to develop open-admission high-performing high-poverty schools.

This stands in stark contrast to the charter school sector, which in city after city (according to rigorous studies form Stanford’s CREDO research center) is producing student-learning gains that far outpace the district.

The solution is a “true portfolio” approach, one that I outline in my book The Urban School System of the Future. We start by seeing the district as nothing more than one of many school operators in the city, placing it on the same playing field as the city’s charter school operators. Then we apply the systemic innovations of chartering across the entire K12 portfolio. We close persistently failing schools, we expand and replicate the cities best schools, we continuously start new schools in the charter sector, and we empower families with choice.

This “sector-agnostic” approach will enable us to continuously grow the number of high-quality schools in our cities, ensuring that low-income urban kids are able to select from among a range of high-performing school options.

The combination of the demotion of the district, the elevation of school quality above school provider, and complete fidelity to smart portfolio management has the greatest chance of developing dynamic, high-performing, self-improving systems of schools that will put underserved kids on a trajectory taking them to the moon and beyond.

This post contributes to the #SmartCities Series- for more information on the upcoming book, see here.

Andy Smarick is a Partner at Bellwether Education Partners, a nonprofit organization working to improve educational outcomes for low-income students. He works in Bellwether’s Thought Leadership practice. His book, The Urban School System of the Future, was released in 2012, and his work has also appeared in The Washington Post, Baltimore Sun, Boston Globe, and National Affairs 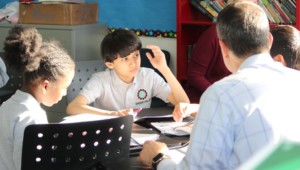