When used correctly, data is one of the best tools educators have to identify and address inequities in education. It’s impartial, honest, and uncorrupted by biases. Thus, in 2018–2019, when Plainview Independent School District (PISD) in Texas partnered with Texas Tech University to conduct an equity audit, they focused on data.

An education equity audit, as the title implies, is a fact-finding process that examines institutional procedures, learning systems, demographics, and perceptions to help expose and understand learning inequities. By studying data from i-Ready, an assessment and online instruction program from Curriculum Associates, Eduphoria!, On Data Suites, and the Public Education Information Management System (PEIMS), the PISD audit team was able to bring some hard truths to light, including achievement disparities, and use their findings to begin making ambitious changes.

Rick and Edna did not undertake the equity audit because their district was floundering.

Over 5,500 students (80% of whom are Hispanic) attend PISD’s 10 schools. The district’s four-year graduation rate is higher than the state average, while its drop-out rate is lower. In 2019, PISD received a “B” overall accountability rating from the Texas Education Agency.

All that said, Edna and Rick knew that they could be doing more to help all of their students succeed if they identified and addressed inequalities.

The equity audit began as a data exercise for the Plainview ISD Leadership Academy. Edna also completed an equity audit as part of coursework she was taking for her Ed.D. program at Texas Tech University. From the beginning of the audit process, Rick and Edna had full backing from PISD Superintendent, Dr. H.T. Sánchez

Having community support is crucial to an equity audit’s success, Rick and Edna explained, because audits can spark difficult discussions and reveal harsh truths, including personal biases that individuals aren’t aware they have. Before the audit, Rick and Edna put a lot of energy into preparing the PISD Administration and Leadership for the challenging conversations to come. “It was prefaced by saying ‘we want you to know, administrators, that this is going to be—this can be—a very challenging process. It can be very personal. You may become uncomfortable because of some of the data conversations,’” Rick said.

As part of the auditing process, the audit team analyzed i-Ready assessment results as well as district data about finances and spending, attendance, discipline, student accountability, and student groups.

The audit revealed inequities Edna and Rick had expected, but there were some surprises as well. Data showed that PISD’s English Learner (EL) population, just under 7% of the student body, was underperforming and underserved.

As for surprises, Edna said that some results weren’t what she anticipated. “We were performing well in areas leadership believed were performing poorly. Conversely, areas [where] leadership believed we would find disparities were actually areas of strength. We, as a district, would be functioning on information based on assumptions had we not gone through the audit equity exercise.”

Rick and Edna worked closely with Dr. Sánchez and campus leadership to analyze data and develop an action plan that would focus, first and foremost, on instruction and classroom dynamics. The plan is deliberate and designed to make sure educators aren’t overwhelmed.

As part of the plan, Edna and Rick are sharing their findings with educators and school administrators. During these conversations, Rick and Edna are careful to not assign blame and to keep the focus on data and students.

The equity audit findings about EL students have led to PISD hiring additional instructional coaches to specifically help teachers bridge language gaps. Edna is working with the i-Ready team to expand their partnership to support improved learning experiences for migrant students. In addition to working at PISD, Rick is also now an adjunct professor at Texas Tech University, where he teaches courses on change leadership, education law, and equity. He recently gave a presentation on i-Ready to the Texas Association of Latino Administrators and Superintendents (TALAS).

Rick and Edna are grateful for the encouragement they’re receiving from district leaders. They’re also excited about the changes they are making and the impact they’ll have on students’ well-being and learning. “[The Board of Trustees’] goals are aligned with our district goals and our district goals are aligned with our campus goals,” Edna said. “We’re all working toward the same area, and we feel that we’re going to make big gains as the years come.”

This post includes mentions of a Getting Smart partner. For a full list of partners, affiliate organizations and all other disclosures, please see our Partner page. 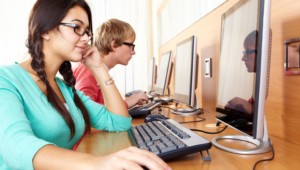