“When the story of our time is written, it will not be said that any of us here followed an uncertain flag…we stand with those who choose a side. The side of human dignity. The side of justice. The side of fairness and truth.”

“What unites us is something at once intangible and resolute: a conviction that the world can be made better; that light can drive out darkness, and love can drive out hate; that, despite all the forces that would have us believe otherwise, there are still such things as facts, such things as right and wrong; that, for all the injustices and inequities in our society, all the flaws in our own natures, we are not beyond repair or redemption,” said Jobs.

Poet and Artistic Director of Social Impact at The Kennedy Center Marc Bamuthi Joseph opened Demo Day with a powerful recitation of “You Have the Rite.”

Public artist Brandon ‘Bmike’ Odums grew up in New Orleans with the idea of being of service to others. “Being an activist,” said Odums means “Loving who you are, loving your community, and saying this is not how it’s supposed to be.” He spoke about his new exhibition at the Newcomb Museum of Art at Tulane.

“We all deserve to live with dignity,” said Marielena Hincapie, executive director of the National Immigration Law Center (#ProtectFamilies). She spoke against laws that prevent anyone that may become dependent on the government from immigrating into the U.S.

Evan Smith, CEO of the Texas Tribune, described a scalable model of vibrant local nonprofit news. “We’re all in this together,” said Smith. “The future of our democracy relies on information to be productive citizens.”

Jasmine Crowe finds it ironic that in a country that throws away so much food, nearly 40 million people in the U.S. (about one in six) experience hunger. She founded Goodr (@TheGoodrCo) to manage food waste. The mission is “Feed more, waste less.” They’ve already served 80,000 meals. Her goal is to be in 20 cities in 2020.

Imagine a relationship-driven school, one diverse by design, where youth engage in real-world projects. Chris Terrill (@ChrisTerrillEDU), executive director of Crosstown High (@CrosstownHigh) in Memphis described the process of visioning, developing, opening, and improving a new urban high school. Crosstown High is one of the XQ SuperSchools, a network of schools dedicated to #RethinkHighSchool.

Sarah Hemminger created Thread to harness relationships to address the opportunity gap in Baltimore. The nonprofit surrounds high school freshman in the bottom quartile with matched mentors. They provide rides, provide support, show up at students’ games—the stuff you’d do for your own child—for 10 years. The support appears to quadruple high school completion rates. The goal: enrolling 7% of the freshman class in Baltimore and supporting them with 20,000 mentors (that’s about 5% of the city).

Former Education Secretary Arne Duncan (@arneduncan) launched Chicago CRED to combat gun violence in his hometown. He spoke about reconciliation with Billy Moore of the Inner-City Muslim Action Network—a man who served 20 years in prison for killing one of Duncan’s friends.

Miami Dade College has the largest undergraduate enrollment in the country. Former president Eduardo Padrón described the process of bringing excellence to the open-access institution.

On Health, Energy, and Economic Justice

“It’s much, much worse than you think,” said Hal Harvey (@hal_harvey) of Energy Innovations (@EnergyInnovLLC) about the climate crisis. “It‘s going to require precision interventions that deliver carbon abatement at speed and scale.”

Harvey is encouraged by the drop in energy prices produced by wind and solar—largely the result of good public policy. But there is a world of work to do to achieve what he called the largest transformation in history.

Andrew Youn serves some of the hardest working people on the planet: small-plot farmers in East Africa. His nonprofit One Acre Fund (@OneAcreFund) supplies one million family farmers with financing, training, seeds, fertilizer and insurance.

Demo Day came to a close with Brian Chesky (@bchesky), co-founder of Airbnb (@Airbnb), describing the rollercoaster ride that built a $4 billion company that 4 million people use on a busy day. He doesn’t like the distinction between for profit and nonprofit, and thinks all organizations should identify and serve stakeholders. He’d prefer to replace quarterly earnings calls with stakeholder calls that would review not only economic indicators, but social and environmental ones as well. “The most valuable companies will be those that society wants to exist,” concluded Chesky.

These representatives of the Emerson Collective represent the “flexible approaches, new models, and improved public policy,” they invest in to address complex systemic failures and expand opportunity.

Demo Day is great evidence that investment is flowing worldwide to good ideas, and that anyone, anywhere can make a difference. Check out the Demo Day video and links to some of the speakers to learn more. 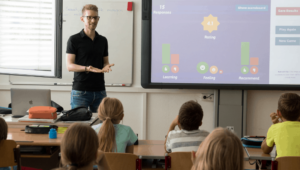