New Orleans has long been known for its rich and creative music scene, Creole cuisine, and French architecture and culture. As a port city at the southern tip of the Mississippi River, it became a vital transportation route and ultimately one of the most unique cross-cultural and multilingual destinations in the United States.

Pre-Hurricane Katrina, Orleans Parish public schools ranked amongst the lowest in all of Louisiana’s parishes. In the spring of 2005, the academic performance, the condition of school facilities, and the level of corruption were unbelievably bad. After the city and many of its public school buildings were devastated by Hurricane Katrina in August 2005, there was an opportunity for the entire community to rethink its education system. The state board placed most of New Orleans Public Schools into the Recovery School District (RSD), an affiliate of the Louisiana Department of Education formed to turn around the lowest-performing schools in the state.

Today, Orleans Parish School Board (OPSB) is an all-charter district and New Orleans some 48,000 public school students attend one of more than 80 charter schools across the city. The transformation to a system of charter schools has been a city- and community-supported effort designed around three principles: educator run schools, parent choice, and public oversight.

Along with a group of parents from the Parent Power Lab, an initiative of the Kauffman Foundation, we visited New Orleans to learn from organizations and schools that have been a part of the movement to advocate for positive change. Many of the organizations we met with are focused on improving the quality of schools and options parents and learners have in the city.

1. Our Voice Nuestra Voz. OVNV “was founded in 2015 with the mission of organizing parents to expand quality educational access for students” and to help advocate for more equitable learning environments and experiences. Rather than provide an agenda to parents to push for, they want parents to activate around issues they care about. Mary Moran, its co-founder, is dedicated to supporting parents and to help address racism in schools and communities. They strive for three goals: 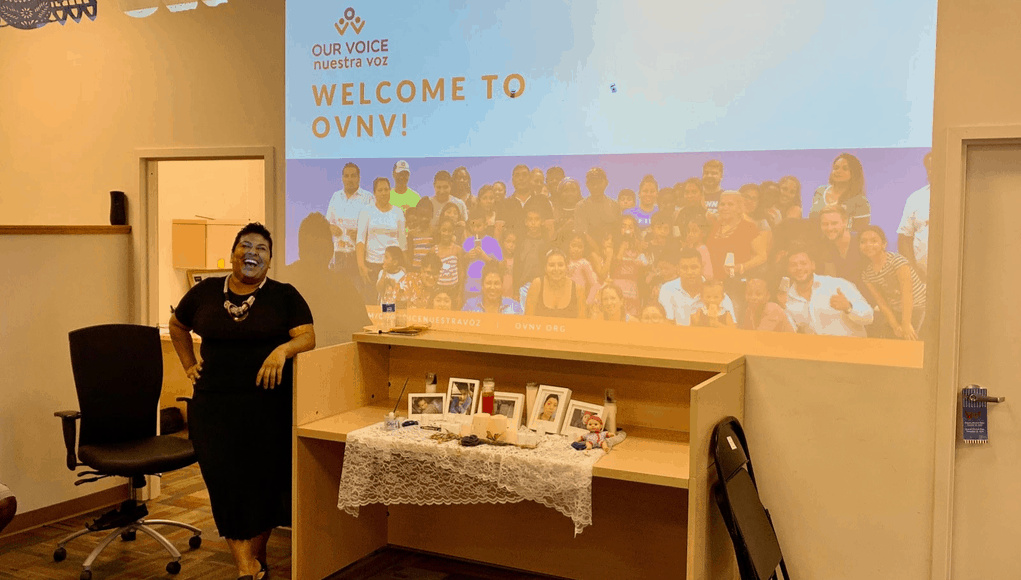 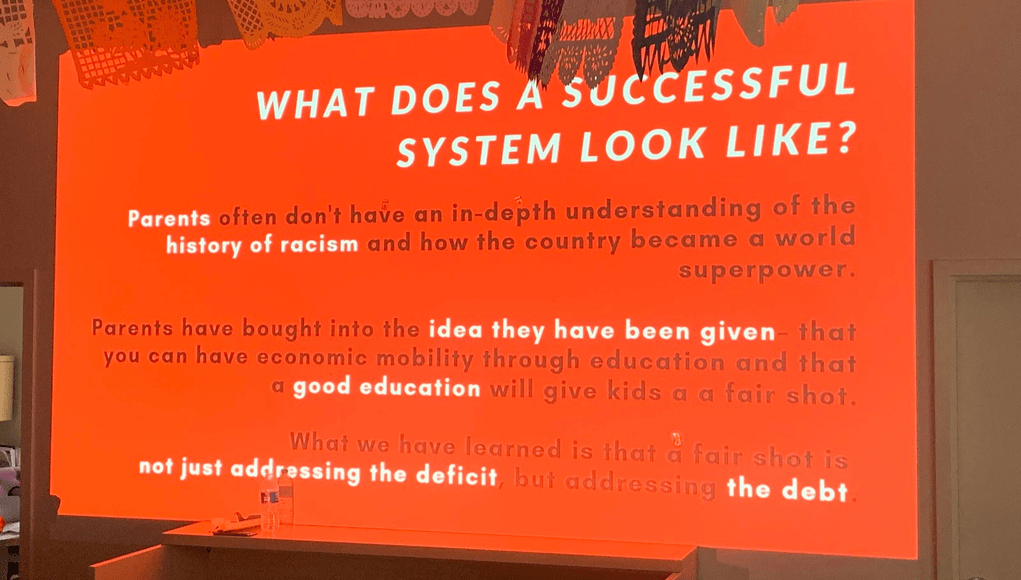 2. Colloqate. Established in 2017, Colloqate Design is a multidisciplinary nonprofit Design Justice practice focused on expanding community access to, and building power through the design of social, civic, and cultural spaces. Sitting at the intersections of disruption, justice, design and creation, the organization’s mission is to intentionally organize, advocate, and design spaces of racial, social and cultural equity.

In 2017, the Colloqate Co-Directors Sue Mobley and Brian C. Lee Jr. began a project called Paper Monuments, a public art and public history project designed to elevate the voices of the people of New Orleans. In March of 2018, it was announced that the Paper Monuments process would be incorporated into the city’s planning for the future of Lee Circle, the central traffic circle in New Orleans that featured a controversial monument to Confederate General Robert E. Lee until 2017. (See Paper Monuments and Paper Monuments Interim Report.) 3. BE NOLA. Founded for and by Black New Orleanians, Black Education for New Orleans (BE NOLA) works to ensure an education that creates better outcomes and opportunities for Black children in the city as a critical factor in building a thriving Black community that is politically, economically and socially strong. Adrinda Kelly leads with the belief that in order to build capacity for increased Black involvement in New Orleans education, the organization must focus on the following three core functions: Black-Governed, Black-Led Schools (BGBLS) support, Black Educator support, and Black Educator gatherings. (Read: Envisioning a Trauma-Informed New Orleans.)

4. YouthForce NOLA. A collaborative between education, business, and civic leaders, YouthForce NOLA is part of a momentous cross-country movement to better prepare youth for postsecondary success. With a vision for an economically prosperous and equitable future for New Orleans public school students, YouthForce prepares students by focusing on the three critical components they believe are needed to succeed in the growing fields of tomorrow: technical skills, soft skills, and meaningful work.

President and Co-Founder Cate Swinburn recently noted that “these factors are the keys to creating a more holistic graduate profile” and that by integrating them with rich academic preparation “we can ensure students are ready for whatever the future of work may hold.”

5. New Harmony High School. One of the first 10 schools selected by XQ Institute as winners of the XQ Super Schools competition, New Harmony High School focuses on coastal restoration, preservation and sustainability through experiential and project-based learning. Students are able to research, think critically and learn by having direct access to the Mississippi River Delta, many times going out on a barge, into the water, and into the local community to be able to make place-based learning connections. The goal is for students to use their passions, talents and skills to address the very real challenge of coastal change facing South Louisiana. The “floating school” has already been making big waves since opening to Louisiana students and completing its inaugural academic year in 2018-19.  (See feature).

6. Rethink. Calling themselves the “Rethinkers,” the Rethink group of activists was formed in 2006 with a mission to reinvent New Orleans public schools with two simple ideas: serviceable bathrooms and decent cafeteria food. In 2012, they were featured in HBO’s The Weight of the Nation documentary, with an installment called “The Great Cafeteria Takeover” spotlighting the Rethinkers mission to improve New Orleans school food and cafeterias.

Today, the school reform organization has a mission to support youth of color in leadership development and taking action for transformative systemic change, using a customized model of youth organizing and development and offering a series of youth-led, adult-led and intergenerational workshops to schools, communities, and partners. (Read about Rethink’s two tier programming offering year-round programs for youth ranging from age 10-23 and check out their website.)

7. The Living School. The Living School is another example of hope and optimism in the educational ecosystem. The public high school is equity-focused, democratic and project-based. Check out this video to learn more about their work:

8. New Orleans Parent Leadership Training Institute (PLTI). New Orleans PLTI, part of a larger national organization, has begun to engage more in local education issues. This is another notable effort in the region to bring parents together for 20-weeks of training. Parents work to identify a cause they want to advocate for and receive training on how to organize, activate and lead.

If you make your way to New Orleans, be sure to check out these organizations. You also won’t want to miss having a meal at Liberty’s Kitchen, a place where “a place where young adults who had been neglected or criminalized could come for a hot meal, a job opportunity, and a support system.” Emily Liebtag, Ed.D., is Education Reimagined's Senior Partner for Systems Transformation. Formerly, Emily served as the Vice President of Advocacy at Getting Smart.