There is a whole culture, a whole possibility of living without school – and people who did it not only were fine, they were better than fine. They were awesome. They’re having grand lives. They’re entrepreneurs, they’re traveling, they’re going to college early. They’re going to the same elite colleges…There is no downside of not going to school. Just quit school and have a better life who would possibly think that is true?


Unschooling is not new. John Holt popularized unschooling with his newsletter Growing Without Schooling in the 1970’s. What is new is the improving learning options and opportunities for students. The ubiquity of low-cost devices and ever improving learning platforms. Anywhere anytime learning learning is possible and it’s powering a generation of students to take control of their learning trajectory.
At the heart of Unschooling is self-directed learning, which is in turn a guise for personalized learning. When asked about personalized learning as it relates to Unschooling, Danford says “it’s all synonyms in my opinion – Unschooling becomes people starting with their passions – Personalized means starting with kids and parents and asking ‘What’s the priority?’” By highlighting Danford’s perspective I’m not advocating for every student to leave school. What I do believe is important though is to ask yourself if your current learning is directly linked to a passion that drives you and to think critically about the ways that you can piece together a learning playlist that builds on a core mission, value or passion. Additionally, Danford suggests to choose school because:

The inspiration behind Danford’s work began when he was a high school history teacher. A colleague shared with him Teenage Liberation Handbook: How to Quit School and Get a Real Life Education by Grace Llewellyn and his life changed. He resigned from his teaching job and went on to co-found and direct North Star: Self-Directed Learning for Teens in Sunderland, MA.
At North Star, an academic plan is produced in partnership with the student. Each student is assigned a personal advisor to help imagine and realize goals, track progress, and facilitate tutorials and community connections. This relationship is at the core of the North Star experience, which is great to see in action because every student deserves to have a caring adult that helps them navigate their learning pathway so that they leave school with a meaningful, personalized plan.
North Star is led by a set guiding principles, with a handful of ideas that should ring true for GenDIY: 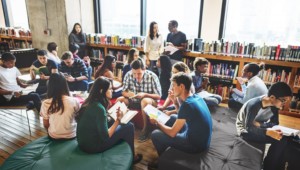 Remote Learning: Lessons Learned and Reflections to Inform the Future Reflecting on the Hybrid Experience