We’ll look back on 1993 to 2015 (the tenure of secretaries Riley, Paige, Spellings, and Duncan) as the era of standards-based reform. Secretary Duncan, who announced his intent to step down yesterday, presided over the last third–a period that will go down in history as the most active role for the federal government in U.S. education.

As a theory of action, standards-based reform seemed to make sense–set clear high standards, measure progress, build capacity, attack gaps, and expand options. Most states got on board and passed legislation in the mid ’90s, the feds followed with bipartisan fervor, but execution never lived up to the hype.

While there was progress including thousands of proof points of what’s possible, it was the unintended consequences–including a narrowed curriculum and weeks of time devoted to testing and test prep–that monopolized the education dialog over the last 18 months.

As a result, Duncan’s last year probably hasn’t been much fun. But his tenure–as the natural result of favorable trends and some well timed leadership by his department–leaves the U.S education sector permanently changed on six dimensions:

Momentum for higher standards was launched (in part) by A Nation at Risk in 1983 and championed by corporate chiefs like IBM’s Lou Gerstner and State Farm’s Ed Rust and by southern governors like George Bush, Bill Clinton, Dick Riley, and Jim Hunt. By the mid ‘90s nearly all states had standards that described what grads should know and be able to do (at least in core subjects). States added end of year tests linked to these standards to measure progress and to begin to address gaps.

This frame of standards and accountability, and a bipartisan commitment to more equitable education, resulted in a reauthorization of the federal elementary and secondary education act known as No Child Left Behind (NCLB) in 2002 when Rod Paige was secretary.

A dysfunctional congress never fixed the flaws in NCLB or engaged in iterative development on its well intentioned frame (like balancing the focus on proficiency with measures of growth). It was out of date in four years and by the time Duncan took office in 2009 it was seriously flawed.

The American Recovery and Reinvestment Act (ARRA) was a massive ($831 billion) attempt to address the Great Recession. It was passed a month after Obama and Duncan took office and included $45 billion for education to partially restore big 2008 cuts in state education. With some good advice from Jon Schnur and Joanne Weiss, Duncan was successful in incorporating about $4.4 billion of incentive funding called Race to the Top. Six months after launch I said, “the mother of all grant programs has produced more reform than any grant program in history.” And that was before the feds had spent a dime. Three quarters of states applied for the grant and made improvements in their plans, policies and laws in preparation.

Starting 2012, Duncan began issuing NCLB waivers to states attempting their own fixes. At some point ESEA will be reauthorized and we’ll be back to states doing their own thing with little comparability, weak accountability, but perhaps a bit more innovation.

An under appreciated area of improvement is graduation rates. In 2014, Secretary Duncan celebrated an 80% graduation rate by wearing number 80 in the NBA All-Star Celebrity Game. In his blog “Why I Wear 80,” the Secretary said, “Often in sports, but rarely in education, do you hear about the heroes whose skill, hard work, creativity, and tenacity resulted in the achievement the whole country should know about. We should all take heart from the passionate, caring work being done in classrooms, schools, and communities across the country.”

The dramatic rise in grad rates was, in part due to a graduation rate compact of 2005, a partnership of Achieve, NGA, and CCSSO, that resulted in a national standard for reporting graduation rates and paved the way for Common Core State Standards. Better data and thousands of new and improved high schools contributed to improvement from about 66% in the mid ’90s to more than 82% today.

I met Duncan in the basement bar of the Chicago Club in the fall of 1999 when he worked for Chicago Public Schools CEO Paul Vallas. He struck me as serious, smart, authentic, and focused–traits that made him a good CEO and great secretary.

Duncan took over from Vallas as CEO of CPS in 2001. By 2003, Duncan had crafted a coherent effort to support struggling schools and to close and replace failing schools (similar to Joel Klein’s Children First in NYC). In 2004, Duncan, the mayor and the business community launched new school campaign Renaissance 2010 which resulted in 13 charter networks, 70 new schools, and laid the groundwork for the next-gen models work New Schools for Chicago is currently supporting.

Margot Rogers, then a Deputy Director at the Gates Foundation, spent four years shuttling to Chicago to support new school development and secondary school improvement. “Few places–perhaps no city–have the deep private and philanthropic support that Chicago does,” said Rogers. “There’s lots of support for innovation, trying new things, and thinking in new ways.” She went on to serve as Secretary Duncan’s chief of staff during his first 18 months in office. She was followed by Joanne Weiss who had administered the Race to the Top program.

Duncan’s most remarkable speech was November 2011 at AEI where he called for “transformational change,” rethinking “structure and delivery” and “explore productive alternatives.” It was the first time a U.S. Education Secretary recognized the potential for “transformational productivity,” the first time a secretary attacked the basic system architecture as “a century old factory model—the wrong model for 21st century.” Duncan railed against seat time requirements, antiquated compensation systems, and inequitable school finance. He called for the smart use of technology—a potential “force multiplier”—online tools and virtual schools.  Duncan suggested that good teachers with good tools could support larger class sizes.

As in Chicago, Duncan remains a champion of equity and advocate of options. Even his detractors acknowledge that he is earnest, honest, and well-intentioned.  The country owes Duncan a debt of gratitude for his service. He has been, and I suspect will continue to be, a champion for children.

If it’s the end of standards-based reform, what’s next? States will continue to guide local education with aspirational standards but they are likely to get broader as states incorporate success skills. Most states will continue to require end of year tests but they will shrink in size as school systems get better at using all the daily feedback students are receiving in digital learning environments.

As noted last week, the next 20 years will be framed not by legislation but an emerging vision of student-centered learning. Created by the rise of new tools, new schools, and new informal learning opportunities, a new vision for authentic, engaged, and personalized learning has become widely shared.

Blending face-to-face and digital learning, the emerging vision suggests each learner should have a unique path and pace, progressing as they demonstrate mastery. The emerging vision embraces broader aims with the expectation that learning experiences must facilitate development of knowledge, skills, and dispositions that prepare students not just for college admission but success in life.

Grant programs reflecting this learner-centered vision have been launched by Carnegie, NGLC, NewSchools, Hewlett, Nellie Mae, and more. The new film Most Likely to Succeed shares the learner-centered vision. Education Reimagined, a collaboration of union leaders, advocates, and philanthropists, shared five elements of the new system in a recent vision document. Over 70 contributors to our new book, Smart Parents, wrote about student-centered learning.

Duncan’s team made the best out of flawed federal legislation and recovery investments. He hired extraordinary people–like Karen Cator and Jim Shelton–that shaped a national EdTech plan and Race to the Top District, and Investing in Innovation Fund. These leaders and programs laid the foundation for what’s next.

Duncan’s departure in December (and the eventual reauthorization of ESEA) marks the end of an era of an active federal government and test-based school-centered accountability. Yes, there will still be state tests for a while but they won’t monopolize the conversation the way NCLB did. The emerging focus on student-centered learning is a positive frame that is changing the conversation and, increasingly, the learner experience of U.S. students. 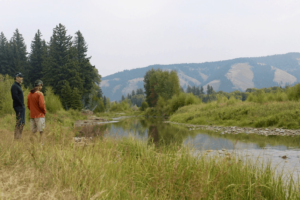 Adding: unappreciated by most, Sec. Duncan has been a champion of international exchanges, globally connecting classrooms, and global competencies for all students, not just the lucky few. He has been an effective ambassador for the country, by convening international summits to listen to and learn from his peers from around the world. He traveled to Haiti, supported UN development goals, and spoke to USAID, quoting Malala that, "education is the only solution." http://www.ed.gov/news/speeches/education-only-solution

I hope he continues to be a voice for global learning for all.