All established organizations struggle with innovations that fundamentally challenge their status quo.  That struggle is the focus on nonprofit think tank Clayton Christensen Institute for Disruptive Innovation. Cofounder Michael Horn said, “These struggles aren’t unique to education. Businesses struggle consistently with the innovator’s dilemma—the ability to prioritize disruptive innovations that would cannibalize their existing business,” adding that organizations usually lock in on a business model consisting of four elements, including value proposition, resources, processes and revenue formula. “These four components help define an organization’s capabilities but also—and perhaps most importantly—what it is not capable of doing,” said Horn.
Where innovation happens, how it spreads, and what gets in the way–these are the questions that drove the the two year investigation that resulted in our new book, Smart Cities That Work for Everyone.
Building on five barriers that Michael Horn identified, here are 13 barriers that schools face to innovation:

If educators are to prepare young people for the innovation economy, they will need an innovation mindset. “To drive lifelong learning and the success of students early on, we must foster an environment where students learn at their own pace in an encouraging environment that cultivates a deep conceptual understanding of subject matter,” said Jessie Woolley-Wilson, DreamBox Learning President and CEO. “When students develop a deep understanding of concepts, they can apply and transfer that learning to new situations and experience success again and again.” Jessie calls this critical thinking and adaptability “nimble intelligence.” Creating the learning opportunities that develop mental agility in young people begins with ecosystems that encourage educators to be innovators rather than compliance monitors. With more innovators and edupreneurs, the barriers won’t last for long.
For more, see:

DreamBox Learning is a Getting Smart Advocacy Partner. 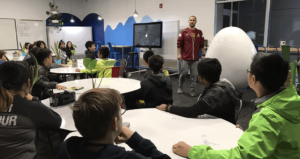 Come visit us at Midway! You might change your mind about this.