Juan Cabrera has been teacher, a school district lawyer, entrepreneur, and high tech executive, and  now he’s the superintendent of El Paso schools. Cabrera stepped into a tough situation. The previous superintendent is sitting in a federal prison–the first superintendent convicted of fraud and reporting bogus test scores for financial gain.

Cabrera has strong ties to El Paso with his mother and his brother, long-time TV anchor Rick Cabrera, residing here. After getting the job in early September, Cabrera moved his family including 3rd grader, a freshman, and a sophomore the following week.

“Education has been my lifelong passion,” said Cabrera in his September letter to the community. His parents are educators. Cabrera spent his formative years with his parents working with migrant children and families in California.  He “worked as an elementary school teacher, migrant coordinator, after-school tutor, and treatment counselor, in low and high-performing school districts in wealthy and in economically disadvantaged areas of Texas and California.” Cabrera said, “These broad and varied education related experiences, along with my corporate and legal background, have prepared me well to lead and serve our diverse community in El Paso.

He said, “Our top priority is to rebuild trust with our stakeholders.” He’s also trying to meet as many people as possible in the district with more than 64,000 students on 94 campuses. He set a high bar in his entry plan and visited two thirds of the schools in the first 100 days.

In his community meetings Cabrera has stressed a students first agenda, “we don’t exist for jobs, we exist to educate kids.”

El Paso has an appointed Board of Managers. In May 2015, seven new board members will be voted in making visible progress in the next 14 months important.

“Juan is smart, innovative and wants to heal what has been a very damaged school district and community,” said John Fitzpatrick of Educate Texas (see recent feature on their 10th anniversary). “Juan is a great leader who has taken on a tough task.”

Over coffee last week Juan said, “I plan to give it my 100% effort to help re-build and ultimately create a sustainable quality education institution.”

I appreciate mission driven folks with diverse leadership experiences willing to take on an urban superintendency. Cabrera is talented, committed and worth watching. 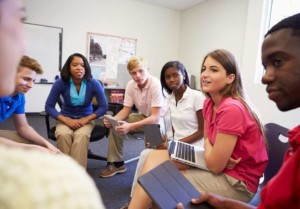 The Future of High School