Since the time of civilizations, humans have been divided on various social fronts and have fought for power. Social groups with absolute power have dominated and created knowledge. An article titled Why is My Curriculum White? explores the reasons behind the predominance of “white men” and “white ideas” in the school curriculum and cites colonialism as the main reason for normalizing and internalizing whiteness. With centuries of domination, the colonial mindset has buttressed itself through literature, films, and other popular media by being reflective of the White society.

While literature has for the longest time been used as a tool to propagate racial stereotypes, it has also been a popular medium of resistance. Black and indigenous writers across generations have used literature to question and confront the exclusive whiteness in American society. And with globalization and other geopolitical events encouraging complex social interaction, multiple communities have used literature to point out systemic discrepancies and discrimination, enforcing a need for racial-cultural literacy.

It is vital to begin educating children about racial-cultural literacy as early as possible. And crucial to the development of this racial-cultural literacy is studying and talking about the histories and experiences of African Americans, Latinos, Asian Americans, Native Americans, and Whites, among others. It is also equally important that children be taught that the existing diversity is not alien or intrusive but just a culmination of factors of human evolution in certain geographic specificities.

While educating children about racial-cultural literacy is easy, conversations with adolescents about the topic could be tricky. Adolescents develop their socio-political behavior through cognition, peer groups, and other social interactions and tend to believe in them strongly. Thus, addressing them requires a nuanced approach, and encouraging diverse fiction reading is a part of this.

As much as racial-cultural literacy is important, one cannot expect children and adolescents to understand the expansiveness of racial diversity with exclusive reliance on direct approaches like history reading and obligated interactions, which could be counterproductive. This is where reading fiction can be very helpful. The beauty of literature rests in the possibilities of counter, alter, and micro-narratives that can relay the importance of inclusion to its readers. Reading hones several cognitive muscles, and reading fiction, in particular, strengthens the emotional quotient (EQ). It also helps develop empathy and critical thinking.

Often, fiction is a stronger reflection and representation of reality than reality itself. To Albert Camus, “Fiction is the lie through which we tell the truth.” To Ralph Waldo Emerson, “Fiction reveals truth that reality obscures.” And for Khaled Hosseini, “Fiction is the act of weaving a series of lies to arrive at a greater truth.”

Also, with increased cosmopolitanism and diffusion of the English language, fiction has increasingly become a vehicle of enlightenment for race, gender, ethnicity as well as indigenous and immigrant issues.

But with fiction achieving distinct multiculturalism, are we equipped enough to understand, appreciate, and celebrate the multidimensional cultural standpoints that authors bring into their writing?

The Use of Literature Guides

Although fiction writers create unique and distinct settings, they tend to reflect in those settings the real-world issues that affect them, and literature guides act as a bridge between the creative world constructed by the author and the social world they are referring to. Such guides help one understand the complex ideas that authors mention and draw attention to the intricate details of the writing, hence providing a fulfilling experience.

For example, an adolescent reading Father Comes Home from the Wars by Suzan Lori-Parks would understand that the play is set in the backdrop of the American Civil War and revolves around the character Hero (a slave), his journey as a Black Confederate, and the forced circumstances he was a part of.

However, literature guides through in-depth analysis raise bigger questions: What does it mean to be free? What is freedom? How free are people of color?

They also help one understand the many parallels that are often overlooked easily: What are the similarities between Homer’s Odyssey and Father Comes Home from the Wars?

They also provide contextual understanding for better clarity and help debunk general myths such as the common belief that the Black Confederates fought against the abolition of slavery.

Another important use of literature guides is the understanding of significant metaphors: What does the dog “Odd-see” symbolize in the story? How is freedom different to Hero (who changes his name to Ulysses at the end) and his wife Penny? What does Penny leaving Hero to run away to the Northern states symbolize?

Thus, to enhance racial-cultural literacy, understanding the social context and the writer’s perspective is necessary. While fiction is the window through which one can enter the writer’s world, literature guides act as a torchlight to explore it. When a reader can better understand the author/character’s point of view and where they operate from, social interaction and responsible behavior become internalized. Internalizing race-sensitive behavior helps break socio-political barriers and makes diversity appear more intriguing than intrusive. When differences and diversity are understood and accepted, the social world naturally becomes an easy space for co-existence.

Sophia is an online ESL/EFL instructor and a passionate educator. She found her true calling — teaching — while she was juggling writing and a 9-5 desk job. When she is not busy earning a living, she volunteers as a social worker. Her active online presence demonstrates her strong belief in the power of networking. If you want to connect, you can find her on Facebook, Twitter, and her blog Essay Writing and More. 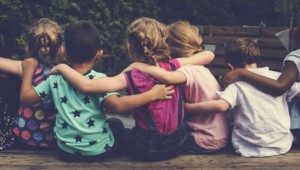