The relationship between Socio-Emotional Competencies and 21st-Century Skills has been uppermost on my mind lately because of a series of key events.

In mid-January I spent the day working with 250 North Dakota school leaders, who came together in Mandan to learn how to better implement the state’s Choice Ready initiative.

The Every Student Succeeds Act (ESSA) plays a dominant role in this effort. Choice Ready, a new element in North Dakota’s accountability plan, requires all high school students to show a range of competencies and meet graduation requirements in one of three pathways: College, career, or military. Ideally, every North Dakota high school student will graduate with the skills, knowledge, and experiences that make them ready for their next stage in life.

Sitting atop these three pathways is a universal requirement for Essential Skills, which the state believes are necessary for post-secondary success. Students are able to select—any time between grades nine and twelve—four or more from the following list of eight indicators:

During my sessions, I was repeatedly asked to outline the relationship between 21st-Century Skills as defined by P21 and Social-Emotional Competencies as defined by the Collaborative for Academic, Social, and Emotional Learning (CASEL). Although the ESSA legislation does not explicitly mention social-emotional learning (SEL), educational leaders can use ESSA funding to provide programming to support SEL. That option is laudable but has generated confusion among states such as North Dakota that want to focus on skill development.

To allay that confusion I told everyone the two frameworks are similar but use different labels to describe the same constructs. That answer wasn’t good enough for me or them, so I dug in.

The table that accompanies this blog lists in the left column the SEL competencies (via CASEL) and their constituent elements and in the right column aligns them with the skills enumerated in the P21 framework.

As you can see, virtually all the P21 skills fit neatly into the SEL competency framework. That said, they were developed by different organizations for different purposes.

The P21 framework, first published in 2006, was the fruit of a business-driven coalition that wanted to create a concept map for schools and help them implement instructional practices that produced skilled workers. The term “social and emotional learning” was coined in 1994 at a meeting of the Fetzer Institute in response to chaotic programming that inundated schools with a wide variety of youth development programs. That meeting generated a coalition that produced the SEL framework, which had as one of its major goals the alignment and coordination of school programming.

Despite different heritage, there is concurrence in the mission and vision statements from the organizations that drive these processes.

In the new report (From a Nation at Risk to a Nation at Hope) from the National Commission on Social, Emotional and Academic Development the authors describe why these competencies matter:

“Children require a broad array of skills, attitudes, and values to succeed in school, careers, and in life. … And these social, emotional, and academic capacities are increasingly demanded in the American workplace, which puts a premium on the ability to work in diverse teams, to grapple with difficult problems, and to adjust to rapid change.”

P21, soon to be a network shepherded by the Battelle for Kids Foundation, shares similar values:

“All learners need and deserve 21st-Century learning opportunities to thrive as tomorrow’s leaders, workers, and citizens. Learning takes place throughout life in many places and spaces. From birth through their careers, learners need a broad range of experiences that develop their skills, dispositions and abilities to succeed.”

The challenge facing business and educational leaders is the necessity to reconcile these two frameworks and the words they use. Both cite the need to infuse academic skills and knowledge with the paramount importance of non-academic skills. The future of work and civic life depend upon it. 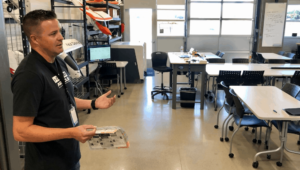 Social Emotional Learning and the Future of Education

If you would like to give kids some agency over their learning and development of any or all of these capabilities, you could get them to use #mmemoe. If you would like a demo, then contact me at [email protected]