Private ownership of property and production, the profit motive, free markets and free trade–capitalism is an economic system and ideology. It made America the world superpower. The rise of capitalism promoted an 80 percent reduction in world poverty in less than four decades led by a 97 percent reduction in East Asia (as shown below). The bad news is that capitalism is not working very well for most Americans. As David Leonhart illustrated, poor and middle class, who used to see the benefits from income growth, are now largely getting the scraps, left behind by the one percent, or really, the 0.001 percent. “I think the greatest issue of our time is the disparity of wealth and the problems that exist for the lower 40 percent of the population,” said Ray Dalio, founder of Bridgewater Associates. Bridgewater is the world’s largest hedge fund, which about $160 billion in assets. According to Forbes, Dalio himself is worth about $17 billion.

“If you carve out that lower 40 percent, not only has there been no income growth, but death rates are rising because of opiate use, suicide, and because they’re losing jobs,” Dalio said. “This is the biggest issue of our time—the biggest economic issue, the biggest political issue, and the biggest social issue.”

Warren Buffett said “You really shouldn’t have an economy with over $50,000 in GDP per person and have lots of people living in poverty who are willing to work. I mean, that makes no sense and we need governmental policies to correct that.”

“Capitalism does not self-correct toward greater equality—that is, excess wealth concentration can have a snowball effect if left unchecked,” said Bill Gates.

Inequality Gets Worse From Here

Our new report on the future of work and learning illustrated how the combination of artificial intelligence, big data and enabling technologies like robotics are changing the employment landscape fast. A PwC report predicts that more than a third of jobs could be at risk by 2030. A new McKinsey report says 400 to 800 million people will be looking for work (some predict bigger losses starting next year).

The combination of AI, big data and new enabling technologies is creating new jobs but most are small technical niches that are even harder to predict than displacement which will vary by sector and geography.

“Workers who have steadily lost access to the economy as digital processes replace them have a sense of things falling apart, and a quiet anger about immigration, inequality and arrogant elites,” said Brian Arthur, an external professor at the Santa Fe Institute.

The angst that fueled the 2016 election only gets worse from here. Financial returns are rapidly shifting from labor to capital–the people that own and finance the robots win in the automation economy.

Psychology (and Calvinism) suggest that young children are inherently selfish. Biology seems to boost the capacity for empathy by age six or seven leading to early-stage altruism or at least a sense of fairness. Early attitudes and habits can be influenced by adults that create terms of engagement and model fairness and generosity.

Two current policy examples from Washington DC appear to look backward rather than forward and exacerbate hoarding rather than promoting sharing.

Not So Neutral Net. The FCC is set to vote December 14 to reverse Obama era regulations requiring internet providers to provide open access to their networks for all digital content.

The new rules would give network providers like Comcast, AT&T and Verizon new power to throttle distribution of certain content and charge more for better access. The proposed ruling is based on a bad definition and sets a bad precedent for sharing.

“Internet rights are civil rights,” said Jay Stanley, American Civil Liberties Union senior policy analyst. “Gutting net neutrality will have a devastating effect on free speech online. Without it, gateway corporations like Comcast, Verizon and AT&T will have too much power to mess with the free flow of information.”

School superintendents are concerned about the rollback of net neutrality regulations – concerns shared by SETDA and iNACOL.

There are arguments on both sides of this bill, but the proposed repeal appears to have little to do with the urge to share and the drive for equity.

Tax Cuts For the Wealthy. The Senate Republican tax plan gives substantial tax cuts and benefits to Americans earning more than $100,000 a year, while the nation’s poorest would be worse off, according to a report released Sunday by the nonpartisan Congressional Budget Office.

Whatever way the House and Senate reach a compromise tax bill, it is will exacerbate rather than narrow income inequality in America

Despite a 2016 election driven by populist angst, the DC dialog seems relevant to plutocrats rather than the broad interests of American’s facing automation economy.

Our new paper on the future of work and learning suggests a couple solutions:

The debate in Washington is disappointing and irrelevant to the challenges we face. Cities and states will need to lead the way into the innovation economy. It starts with learning together about what’s happening and making decisions our kids will be proud of. Evidence That Makes it Evident: Improving Assessment by Emulating the Trades 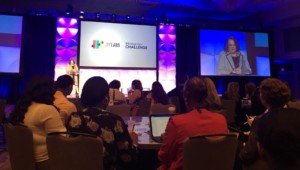 JFF Horizons: Building New Bridges to the Future of Work and Learning

In contrast to a tax system for the automation economy, the proposed deal (according to Fareed Zakaria) may be the worst piece of legislation in a generation https://www.washingtonpost.com/opinions/the-gop-tax-bill-may-be-the-worst-piece-of-legislation-in-modern-history/2017/12/14/c1def814-e119-11e7-bbd0-9dfb2e37492a_story.html?utm_term=.140ce63e7972