It’s no secret that I’m a fan of nonfiction comics and graphic novels, especially ones about science.
In the past few years there’s been a small but steady stream of new titles available, and late last year First Second press announced a new series for kids called, appropriately, Science Comics.


Each volume covers one topic; the first two titles available are Dinosaurs: Fossils and Feathers (by MK Reed and Joe Flood) and Coral Reefs: Cities of the Ocean (by Maris Wicks).
Aimed at kids ages eight and up, both Dinosaurs and Coral Reefs are gorgeously illustrated and maintain a light-hearted and approachable voice of narration.
Content ranges from the basic (such as the basics of the water cycle) to the complex (like taxonomy of species and the chemistry of ocean acidification).
The complex content will probably be more interesting to older or precocious readers, or read-alongs with a parent or teacher.
Both books would also be appropriate for middle schoolers, or even older kids and adults as entertaining easy reads. (I enjoyed reading them, and I am well past my high school days.)
These are not textbook replacements, but would make great optional or supplemental classroom reading. They would be a fun way to introduce topics or accompany curriculum about dinosaurs, geology, or general Earth science (Dinosaurs), or the oceans, ecology, or conservation (Coral Reefs).
The complex content lends itself well to group discussion or as a launching point for a classroom activity or experiment. They’d be great for summer or independent reading lists (depending on students’ reading level). And, as with many comic books, they could be a great way to coax reluctant readers to engage with nonfiction.

While they are full of factual content, these books are clearly meant to be engaging stories that will inspire wonder and curiosity in readers.
Dinosaurs sprinkles information about prehistoric life through a story that follows the history of paleontology from the Greeks to the bone wars of Marsh and Cope, up to modern work in Antarctica and beyond (including a last minute update to reflect new science that reinstates Brontosaurus as a real dinosaur).
Coral Reefs dives into the underwater ecosystem of tropical reefs (while also touching briefly on cold-water reefs), going from a global perspective down to the microscopic and back.
Along the way, it explores the many different species that can be found in tropical reefs, and even includes some basic chemistry of how corals and ocean acidification work.
The next volume of Science Comics, Volcanoes, will be available in October 2016, and Bats will be available in February 2017.
For more, see: 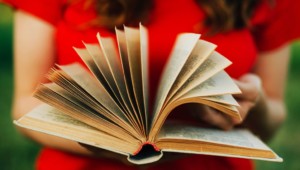