From new grant opportunities to new learning environments, new toolkits, and reports, this week’s news features high impact stories, exemplary of the importance of this time of year.

1. Attention they deserve. Reynoldsburg Schools (on our 100 Schools Worth Visiting list) is getting national attention for their personalized, blended learning efforts with a feature article in the WSJ. “They came up with a really thoughtful, unique way to rethink high school,” said Tom.

Great to see @ReynSchools gets the nat’l spotlight it deserves! http://t.co/wqPc4rKkNK via @WSJ #blendedlearning #deeperlearning #edtech10

Check out the Reynoldsburg advisory system and Deeper Learning profile.

2. Merit badges. Pearson and Boys Scouts of America are collaborating to produce interactive digital merit badge pamphlets to transform the teaching and learning experience for youth and merit badge counselors. Recognition systems (e.g. badging) are one of 12 features of next-gen platforms.

4. The cards you’re dealt. Seattle-based design and innovation studio, Artefact, envisioned In The Cards, a career discovery concept that is supporting students with a personalized engagement platform. Similar to My Best Bets, In The Cards is aiming to serve underserved students.

Your Future Is In the Cards: Education and Design http://t.co/AfTZPteRf2 via @artefactgroup #EdTech10 — tyler (@post_west) June 3, 2015

5. Taking to scale. The next round of the US DOE Investing in Innovation grants has been announced. The 2015 Scale-up and Validation competitions are available for local ed agencies, nonprofits, and consortiums.

6. Imagine that. 100 new Imagination Chapters will be launching this summer! The low-cost, high touch, informal learning environments foster creativity among students, aligning with STEM and maker initiatives championed by the White House. Drawing inspiration from the Global Arcade Challenge, pop-up learning chapters are looking for hosts. Application deadline is June 15.

7. Policy Driven. SETDA and the Friday Institute for Educational Innovation released a new report that highlights examples of states with policies that support the expansion of EdTech. This builds on recent research that found that the creation of high access, connected learning environments can be supported with policy. Unlike the Digital Learning Now report card, the SETDA review didn’t really consider online learning.

9. Refining an Opportunity Culture. The Opportunity Culture Toolkit is now available for districts and schools to support teachers in extending their impact, for more pay, within budget and without forcing class-size increases. This a great reminder of the importance and potential of prize mechanisms.

10. Soft Skills. The importance of non-cognitives (a term that Andy Calkins believes we should trash) has been gaining traction recently. With the growing attention, the National Assessment of Educational Progress will be including measures of these factors in the background data collected with tests beginning in 2017.

Mucho dinero. Duolingo landed a giant raise of $45 million led by Google Capital. This series D round funding brings the free language learning service’s total funding to date to $83.3 million, its valuation is now around $470 million. This news signals the importance of language acquisition, and the leadership role of world language instructors.

A closing thought. With the explosion of mobile, more data will be produced in the next 2 years than in all of human history. What are you and your organization doing to learn from all of the new data? 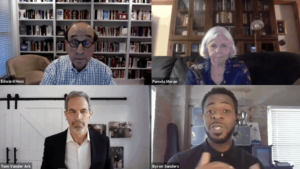