The first Maker Faire in New Orleans was held over the weened. It was hosted by a new school incubated by 4.0 Schools and New Schools New Orleans (NSNO)– Bricolage Academy.  Matt Candler, founder of 4.0 Schools, said the event represents an important proof point that the New Orleans education story is about much more than recovery or making schools less bad than they once were, “Events like Mini Maker Faire prove that the future of school in New Orleans is a community effort – an effort by an entire city to invest in creativity, entrepreneurship, job creation in entire new industries, and the future of an entire city.”

As he watched hundreds of kids making robots, learning to code, and making jewelry, Chris Schultz, the founder of the city’s most vibrant coworking community, Launchpad, described the shift he sees, “This is so much bigger than the entrepreneurs at Launchpad right now. This is about the startups and companies these kids will start in the next 10, 20 years.” City leaders like Chris have made the connection between the academic success and creative potential of New Orleans’ kids and her long-term prosperity as a city. Mini Maker Faire, Bricolage, and dozens of other small-scale efforts across the city give him and others a tremendous sense of hope for the future.

End of failure. “Soon there will be zero failing schools in NOLA,” said Neerav Kingsland, CEO ofNSNO, in a November 2013 speech.  The same could not be said for any other urban center in the country. The devastation of Hurricane Katrina in 2005 created an opportunity for the community to rethink the education system.

Over 90 percent of New Orleans public school students attend charter schools–the highest in the nation according to the Cowen Institute. The new system was designed around 3 principles: educator run schools, parent choice, and public oversight.  A student of portfolio strategy, Kingsland calls NOLA an inverted system where “parents and educators have the most power.”

Of the 112 failing schools in Louisiana, only 9 are in New Orleans—and they will be improved or closed. Compared to the old system, the new schools in New Orleans have learning gains equivalent to 5 months of extra learning. New Orleans has nearly caught the state average in proficiency and college readiness and passed the state average graduation rate. African American students have gone from lowest performing in the state to 5 percentage points above the state average for African American students. That is “improved but not excellent,” said Kingland, “New Orleans needs 50,000 high quality seats to provide every child with an excellent education” and he estimated that they were half way there.  (Kingsland announced he was leaving NSNO to help other cities to pursue New Orleans-style education reform. See his exit interview with Rick Hess)

Innovative schools. In 2008, Leslie Jacobs launched nonprofit Educate Now! to make reform effective and sustainable. In the last few years that meant supporting the growth of blended learning in New Orleans schools. In addition to assembling and coordinating $3 million in local funding to assist schools in exploring, planning for, and implementing blending learning models, Educate Now! supports programs to foster broad engagement including a Community of Practice for blended learning leads, and the New Orleans Blended Learning Fellowship for teachers interested in converting to a blended model.

With help from NSNO, Educate Now!, and national donors, there is new crop of innovative schools in New Orleans, including:

Backstory. New Orleans has long been a creative hotspot for music but not education. When I visited in the spring of 2005, the academic performance, the condition of school facilities, and the level of corruption were unbelievably bad.

Meeting edreformer Leslie Jacobs was the highlight of that trip. As a member of the State Board of Elementary and Secondary Education (BESE), Leslie was a primary architect of the Recovery School District (RSD), a statewide school improvement zone, in 2003. Leslie had some great allies including fellow BESE board member Paul Pastorek. Rudy Crew had created a similar takeover-zone in NYC two years before, but the RSD was the first aggressive state effort to address chronic failure. The RSD took over a failing school in the fall of 2004 and gained control over for four more in the spring of 2005. Jacob’s leadership turned out to be fortuitous.

Hurricanes Katrina ripped through New Orleans in August of 2005 devastating most school buildings and displacing many families. After the hurricanes, the state board, with the support of Governor Blanco and State Superintendent Cecil Picard, decided to place most of the Orleans public schools into the Recovery School District.

A few weeks after the hurricanes, Jim Shelton and I visited with Tulane president Scott Cowen who was charged with leading a committee to reform and rebuild the city’s failing public school system. Cowen, Picard, and city leaders were deep in triage efforts and making temporary education arrangements. In the midst of the chaos, Cowen asked how the education system could be redesigned for better performance. We described a portfolio approach (that we had written about in 2004) including high performing charter networks. Locals didn’t initially support the RSD takeover. The idea of a portfolio of operators also received mixed reception.

After the RSD takeover, Jacobs and her colleagues began recruiting partners and high-quality charter operators including KIPP which made an early commitment to being part of the new system (today they operate nine schools). The fact that BESE and the legislature addressed chronic failure, developed a solution, and built capacity pre-Katrina is a critically important to the educational success evident today.

Talent confluence. On a visit in 2007, I found the most amazing confluence of education talent ever assembled at a converted retail center purchased by Tulane and home of the Cowen Institute as well as Teach for America, New Leaders, TNTP, the Louisiana Association of Public Charter Schools, and NSNO. For local and recruited leaders that wanted to build a great network of schools, the converted mall at 200 Broadway was a turbocharged incubator.

In 2007 BESE selected Paul Pastorek as state superintendent. Pastorek, a bright and brave attorney and edreformer, turbocharged state and RSD efforts. He was the founding chair of Chiefs for Change and probably the best example thereof for the four years he served. Pastorek recruited Joel Klein’s deputy John White from NYC to run RSD. White followed Pastorek as State Superintendent in January 2012.

New Orleans is the best example of the difference that a focused talent development and recruitment strategy can make:

EdTech. A Brookings report indicates that entrepreneurial activity in New Orleans is now 40 percent above the national average. Forbes said, “Assets such as low cost of living, high quality of life, and culture” have been essential in attracting and retaining the talent that has turned New Orleans into a tech hub.

Two of the most vibrant and well know EdTech startups were hatched at Idea Village and supported by the New Orleans Startup Fund: super gradebook Kickboard led by Jennifer Medbery; and recent winner of TechCrunch NOLA Tutti Dynamics, an online learning platform for music instruction.

Matt Candler is growing people that are growing educational solutions. His 4.0 Schools, is based on a process that most organizations start as an idea and go through a five-stage process: itch, hunch, test, launch, and scale. Matt and the team “live on the left side” turning hunches into testable products. They’ve supported a bunch of  NOLA EdTech startups including:

Some of the 23 ventures launched by 4.0 Schools are impacting other cities including Lead Prep Southeast, a 5-12 charter school in Nashville and Community Guilds and their STE(A)M Truck in Decatur Georgia.

Another NOLA? Can the NOLA model be scaled or replicated? New Orleans schools spend about $10,000 per student, or just under the national average.  On top of that they’ve raised about $100 million of philanthropy post Katrina.

Improvement of the last nine years has been a change in governance more than change in school models. Kingsland thinks other cities can copy the New Orleans model by replacing or transforming about 5 percent of schools every year—after 10 years that would be replace or update the lower performing half of the system.

Asked about the biggest mistake, Kingland said, “We didn’t think enough about networks early on.” (See recent post on the importance of networks to scaling quality).

There is not really a central office anymore. Now that there are so many charter schools, there are lots of questions about special education, admissions, discipline, and facilities being worked out as NOLA invents a system of schools. They have addressed enrollment with a common application (OneApp), discipline with a citywide standard, and long term building maintenance (proposed bill). The RSD and Orleans Parish School Board just signed a Cooperative Endeavor Agreement addressing special education, and services for truant and adjudicated youth.

A year ago Erika McConduit, Urban Leagues, said, “Parents are taking choice seriously.” A recent survey suggests that parents are 40 percent more likely to access educational options. However, Andre Perry, Loyola, said “there is a certain sameness to all the schools.” He argued for more diversity in options, particularly in career and technical education.

Perry and McConduit said it was time to do more to engage minority communities and get them more involved in school governance. Perry argued that despite big academic gains, the African American community has seen much in the way of economic gains.

Leslie Jacobs, argued, “There is 50 times more involvement with school governance than there was before Katrina,” largely a function of “350 local charter board members, representing every neighborhood and ethnicity and coming from very diverse backgrounds and experiences.” Jacobs and others noted how important the strong state accountability system was to creating the RSD and quality options. Caroline Romer Shirley and the Louisiana Association of Public Charter Schools were critically important  in community engagement and charter school development.

Jacobs is worried about sustaining the continued academic growth. She believes the keys to NOLA 2.0 include 1) building human capital, 2) rigorous authorizing, and 3) continuing to innovate.

Can it be done elsewhere?  The question may be, as Caroline Romer Shirley asked, “Can school boards reinvent themselves around portfolio?”

While the first decade post-Katrina was enabled by governance reform and powered by an amazing confluence of talent it looks like the second post-storm decade will be powered by the freedom of charter schools to innovate, a harbormaster like NSNO, and a thick web of support for edupreneurs. New Orleans will continue to be one of the best example of what’s possible in urban education.

We’re updating all the Smart Cities posts and writing a book about learning ecosystems–you can help on both fronts.

Thanks to Leslie Jacobs, Neerav Kingsland and Matt Candler for help updated this post. MIND Research Institute and Presence Learning are Advocacy Partners.  LearnZillion is a Learn Capital portfolio company. 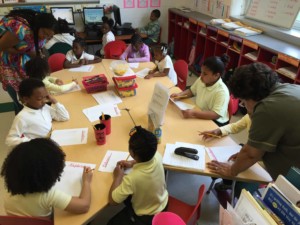