Would you like to play a game? Over the course of two days, I asked 71 paraprofessionals, teachers, and administrators this question. We weren’t trying to find something better to do than the task at hand for their district’s in-service training for which I had been brought to Sun Valley, Idaho to facilitate. Rather, we were getting ready to have one of the best in-service sessions that many of us had experienced. “Would you like to play a game?” wasn’t an attempt to derail our potential productivity. It was the starter that signaled the beginning of our foray into learning, an invitation to play what I had dubbed The Google Game.

Borne from a desire to differentiate professional development to meet educators at their readiness levels, The Google Game is an immersive challenge-based quest through sequential levels, each of which introduces and focuses on the application of a different Google App for Education. As each level is mastered, players can level up and collect a badge to show their progress through the game along with their acquisition of new skills until eventually taming the final boss (that’s video game jargon for the greatest challenge) to become The Google Game champion.

In creating the game, I had four goals in mind. First, it had to allow players to participate at their own pace, otherwise the professional development that I was offering would only reach a small segment of the group. Second, it had to transcend the time frame set for our three hour session so that potential achievement didn’t stop once the session ended. Third, the game had to be scalable. In other words, it had to work whether only three people showed up to play or three hundred accepted the challenge. And fourth, playing The Google Game had to build comfort and confidence with the new tools that players were being introduced to throughout the duration of the game.

The game was hosted on Google+, and as each player logged in to his or her district Google account, I explained how the game would be played. Once everyone had joined the sessions’ Google+ Community, I walked each group through the first level where they learned about the basics of understanding Google’s social networking platform.

By design, I spoke from the front of the room as little as possible. After the objective of The Google Game was made clear as well as how to move from level to level I shifted my role from Sage on the Stage to Mentor in the Center.

Each level hosted three challenges that must be completed along with a form that players were required to fill out after completing each set of three tasks to level-up before moving on to a new level and a new Google App. Players either viewed a YouTube video, read a blog post, or visited a website to acquire the information necessary to using the Google App spotlighted in each level. And it was as they were working on the individual challenges that I floated around to offer one-on-one support. In the beginning, I found that I was needed more by some and less by others due to relative skills with the Internet. Nevertheless, as the game continued I was needed less and less by all as a result of the nature of the game causing players to connect with each other to support one another’s pursuits with social problem solving, discussion, and the sharing of ideas.

Naturally, The Google Game proved to be a bit much for a few players who did not have the requisite basic computing skills to begin with. These folks hung on as long as they could until the process of technological natural selection overcame them and they quietly dismissed themselves.

When all was said and done, 71 educators had played The Google Game, and 4 prevailed as champions. Four individuals had completed all seven levels in the three-hour sessions in which they participated. Though the sessions were designed to be a game, generally, a success ratio like that would qualify as a failure. It’s important to note, though, that while the in-service training is in the past, The Google Game hasn’t ended.

If you were to view the Blaine County SD Google Game community on Google+, you would see players continuing where they left off at the conclusion of their inservice. New blog posts are being written. And new comments and feedback are being offered from individual players to others who continue their pursuits of knowledge. But perhaps best of all, new educators are starting to play the game. Instead of leaving gratified that their day in district-prescribed training wasn’t as painful as it could have been, the paraprofessionals, teachers, and administrators who played The Google Game went back to school and challenged a colleague to play with them. Isn’t that what professional development is supposed to do? 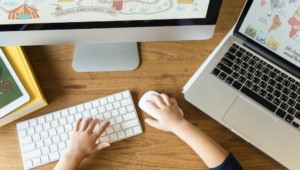 Dave,
What a great idea! This is a truly a way to let reluctant teachers take charge of their own learning on their own time. May I borrow and edit your idea to fit my District's needs? Thanks!