Featuring lots of great information from Education Elements, Edudemic asked and answered the question: What Exactly Is Blended Learning?
Idaho will partner with HP to manage the statewide rollout and implementation of a 1:1 ratio of students and teachers to devices in every public high school in Idaho. This rollout is part of the Students Come First initiative. HP is collaborating with technology organizations to implement specific areas of this program in Idaho, including professional development.
ISTE released a new, free ebook: “Revolutionizing Education Through Technology:The Project RED Roadmap.” It’s a 1:1 implementation must-read.
San Francisco nonprofit Silicon Schools Fund announced a $25 million fund to create 25 new or redesigned blended learning schools by 2018.  Brian Greenberg has raised half of the fund so far, including $5 million from the Fisher Fund.
DC students are testing the Teach To One learning system (pioneered in NY by New Classrooms, inventors of School of One).
Wow! Rocketship announced their overall score of 855 on the 2012 Academic Performance Index (API), making Rocketship the top-performing school system in California serving primarily low-income students.
The Maryland State Department of Education picked theBlackboard Learn platform to replace its current learning management system (LMS) and deliver all state-offered online courses as well as professional development for the state’s 60,000 teachers. All courses available through the Maryland Virtual Learning Opportunities program, a service provided by MSDE that offers online courses for high school credit, will run on Blackboard Learn.
THE Journal released a new 1:1 Case Study: Riverside Unified School District: Large School District Implements One-to-One Tablet Computer Program. We’re excited to see Riverside get the attention it deserves–especially after their great presentation on our BYOD panel at #VSS12.
The Hawaii Dept of Education wants to equipevery public student with a laptop or tablet by 2015. The three-year rollout will start in the coming school year. About 60,000 students would receive laptops or computer tablets annually. Read Funding the Shift to Digital Learning to learn how your state and district can create high access learning environments

Apple’s release of the new iPad Mini is making headlines and piquing the interest of schools looking to increase student access to devices. The devices cost $329 for a Wi-Fi-enabled tablet.
For a limited time, Google for Education is offering schools a $1000 credit toward Chrome App Packs for each classroom set of 30 Chromebooks purchased (limit: $3000 in credit).  Interested schools should complete the”Contact Sales” form and speak with a Google representative about this offer.
Amazon announced an initiative to get its Kindle e-readers and tablet computers into schools. Whispercast will allow teachers to manage classroom Kindle fleets from a central online location to set up policies and add content from the store.

iNACOL hosted more than 2,200 online and blended learning educators, administrators, students, researchers, developers, and entrepreneurs in New Orleans this week at #VSS12, the premier online and blended learning conference for K-12 education.  iNACOL released the report “Measuring Quality From Inputs to Outcomes” that lays out a framework for solving the quality problem. Check out our Getting Smart coverage  in our The Shift is On Smart Update.
K12 Inc. honored five schools for its Transformation Award at iNACOL’s VSS in New Orleans.
The Next Generation Learning Challenges (NGLC) initiative funded by the Bill and Melinda Gates and William and Flora Hewlett Foundations announced the Wave iii Winners for the best in blended learning. Overall, NGLC has awarded $30 million in grants to 78 winners.
Florida Virtual School was named one of the 25 “Coolest Schools in America” by Scholastic Parent & Child magazine. “The Coolest Schools in America,” cover story featured in the Fall issue of the publication and on the magazine’s website.
SETDA launched a new online database to help users track state-level policies directly affecting educational technology. The State Education Policy Center, or SEPC, will focus initially on broadband Internet access, online assessment, and digital content.
EdWeek featured Tom Rooney & 4,200-student Lindsay Unified School District in California to discuss competency-based education-supported by digital learning tools.  We agree that they’re perfect partners and will release a paper on the topic early in 2013.
Kaplan K12 Learning Services has partnered with the Council for Opportunity in Education to offer SAT and ACT On Demand programs to students in Georgia, Illinois, Kentucky, Pennsylvania and Texas.
In a new set of recommendations aimed at advising state leaders on ed-tech integration, the The National Association of State Boards of Education (NASBE) released the report Born in Another Time: Ensuring Educational Technology Meets the Needs of Students Today—and Tomorrow that offers a set of recommendations to advise state leaders on ed-tech matters.

HuffPo ran a piece from California STEM Learning Network CEO Chris Roe that reviews the need for increased attention to STEM and speaks to the opportunity to do so presented by the shift to CCSS.
Basketball legend Kareem Abdul-Jabbar will help lead efforts to boost after school STEM learning opportunities for California’s kids, as announced by State Supt Torlakson at the STEM Summit in San Diego.  STEM is a major cornerstone of Torlakson’s Blueprint for Great Schools and the focus of a task force he created in the spring.
Twelve women from across California were honored as “Leading Women in STEM.” Honorees were awarded for their leadership in advancing critical areas of STEM education including adoption of Next Generation Science Standards, strengthening STEM teacher pathways, advocating for strengthened public-private partnerships and alignment of resources, and ensuring all California students have access to high-quality STEM in out-of-school time.
SparkFun Electronics offers classes and a number of online tutorials designed to help educate individuals about embedded electronics. An upcoming face to face course allows students to “Solder Your Own Microcontroller.” By the end of the night, attendees will have a functioning robot brain to take home and start programming for their very own project. The “Intro to Arduino” class focuses on programming basics and fundamentals.

EdWeek asked a big question last week: Are You Tech-Ready for the Common Core? It’s a question we’ve also been thinking about lately. In Adaptive Testing Evolves to Assess Common-Core Skills, the question of CCSS-readiness is focused on shifts in assessment. The next DLN Smart Series paper will deeply explore these issues by addressing how states and districts can “Get Ready for Online Assessments.”
EdWeek’s latest issue of Digital Directions, focused on the Common Core also offered a look at how Common Core Drives Interest in Open Education Resources and more.
The Alliance of Excellent Education will host a webinar on Tues., October 30: Building on the Common Core State Standards to Improve Learning for English Language Learners.This webinar will highlight two such initiatives: 1) Stanford University’s “Understanding Language,” which looks at the language demands contained in the new standards; and 2) The Council of Chief State School Officers’ “Framework for English Language Proficiency Development Standards.”

Notion Inc, the group behind the Popplet app praised the release of Apple’s iBook extension and iPad mini.  Popplet allows students to collect text, and image-based resources together on one canvas and encourages students to ‘think visually’. Notion has a special offer just for Getting Smart readers. The first five people to email [email protected] with the subject line “Popplet” will receive a promo code for a free download.
2Tor announced an updated mobile app with more features for students, including better tracking of student progress. 2tor partners with elite universities to offer virtual advanced degree programs.
Edudemic recently posted a list of the best iOS applications for mobile learning. The fine folks at Online Universities posterized the list for your viewing pleasure.
EPS launched its first eBooks for reading intervention at iNACOL in New Orleans. All 120 Illustrated Decodable Readers in its S.P.I.R.E.® (Specialized Program Individualizing Reading Excellence) reading intervention program will be available December 2012 for use on iPad, Kindle and Nook.
Schoology,a cloud-based, collaborative learning platform for K-20 classrooms announced that GoAnimate is now available in the Schoology App Center–enabling teachers and students to create video lessons, presentations and materials for flipped classrooms and more.
ConnectYard announced a new upgrade program for Blackboard Learn customers that will allow K12 and higher ed users to send emergency notifications to students via Facebook, Twitter, LinkedIn, text messaging and email for free.

A new blended learning Penn State program links the state branch and main campuses through the the Penn State Video Learning Network (VLN). Students taking the course sit at their local Penn State campus one night each week in a special classroom outfitted with video conferencing equipment that delivers live courses from one Penn State campus to up to three other campuses.
Over 100,000 students registered for the first edX courses that began last week – computer science and an adaptation of the Harvard School of Public Health’s classes in epidemiology and biostatics. Students will receive a certification of completion and an opportunity to take an exam and receive a credential.
Tens of thousands of students registered for new free online courses offered by the University of Virginia through Coursera. The university is offering six classes, with enrollments that as of last week ranged from less than 10,000 to more than 35,000.
University of Texas System regents approved a $10 million investment in MOOCs, becoming the first public university system to join edX, the nonprofit partnership started by Harvard and MIT. UT plans to launch four courses by the start of next school year.
The Saylor Foundation announced that more than 1.1 million visits to 21 college-level Saylor.org courses on iTunes U have generated over 290,000 subscriptions and 687,000 downloads since the Foundation launched its iTunes U page in May 2012. The Foundation will contribute additional courses each month with  267 complete courses currently and more coming.

Parchment, one of the student data innovators we featured in the DLN Smart Series paper “Data Backpacks,” recently raised $23.5 million in VC from several investors, including New York-based investment bank The Raine Group and education-focused investment fund GSV Capital Corp to expand its digital transcript services.
The Louisiana Children’s Cabinet recently unveiled the Louisiana Kids’ Dashboard, which consolidates data on health care, education, and well-being from five state agencies. Each indicator shows the baseline, current and target levels, and displays trends to indicate if Louisiana is doing better, worse, or the same as the baseline for that indicator.
Nelson Heller, president of the HellerResults Group and founder of The Heller Reports newsletters and EdNET: The Educational Networking Conference, recently released a report on big data in K-12 education that echoes many of the same assertions as our recent work on student data.  Check out Digital Learning Now’s just-released infographic “Powering Personalization” for more information.

Dreambox Learning CEO Jessie Woolley-Wilson and Nellie Mae Foundation’s Nicholas Donohue were appointed to iNACOL’s Board of Directors.
The Education Growth Summit 2012 announced the selection of 14 early-stage companies selected as finalists in the “EdGrowth Entrepreneur Open” competition. The selected companies offer innovative solutions for enhancing learning; improving the operational performance of education institutions; and facilitating workforce development and individuals’ employability.
Ford Motor Company is inviting high school seniors and college students who exemplify innovation and commitment to their communities to compete in this year’s Heart Behind the Oval Community Challenge. Students can submit a brief video or photo essay on the Ford Blue Oval Scholars Facebook page now through Dec. 14.
The George W. Bush Institute announced the addition of nine new principal preparation sites to the Alliance to Reform Education Leadership (AREL), bringing the total number of affiliated programs to 28 nationwide. Through AREL’s alliance of innovative principal preparation programs, the Bush Institute is working to redefine the role of America’s school leaders.
Disclosures: Florida Virtual School,  K12 and Digital Learning Now are Getting Smart Advocacy Partners. Tom is a director at iNACOL. 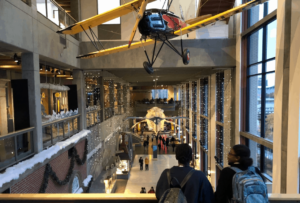