“Game Change: How Game-based Learning Helps Common Core” by Nigel Nisbet first appeared on Education & Tech.
One of the exciting things that leaps out to me when reading the new Common Core standards for Mathematics is that the spirit of inquiry and curiosity is back, hardwired into a document that will likely form the basis for mathematics teaching and learning for a long time. My attention is drawn for example to the Standards for Mathematical practice where it emphasizes that students need to become persistent problem solvers, plan solution pathways, and ask themselves, “does this make mathematical sense?” Even the grade-level specific content standards themselves are full of phrases like “Students will understand…” and “use visual models to explain…” So in order to build true conceptual understanding during the learning process, students will need considerable practice at being challenged to make sense of mathematics for themselves.
Existing instructional materials do not meet this need, and reordering chapters and adding an “Now Aligned to Common Core” label doesn’t solve the fundamental problem: most materials are designed for use with direct instruction where we tell students how to solve a problem, and then have them practice by doing more of the same type of questions. By design there is no need to for them to think critically about solution strategies and there is little attempt to engage their curiosity: either they remember and correctly apply the procedures, or they don’t. And while technology does have incredible potential for education, most attempts to capitalize on it thus far, like the much-vaunted “flipped” classroom, are really little more than a “technologized” version of direct instruction and as such will have little impact on Common Core success. A more fundamental change in instructional design is needed.
Game-based learning is one way to change the educational paradigm. A game is inherently about challenge (think Angry Birds), and a game can engage children in persistently trying to overcome challenges (think Guitar Hero), and games often require the use of strategic thinking for success (think Chess or even Monopoly). However, all of these games are designed to entertain. To design a game for education is very different: The challenge, the engagement, and the strategic thinking used in the game must all have a specific learning target. Let’s take an objective, right from the Common Core, “Students understand a fraction as a number on the number line” and see what this looks like when built up into a successful game, currently played by over half-a-million students. 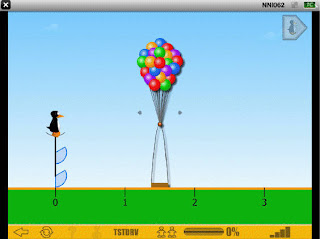 The penguin, JiJi, needs to get from the platform on the left to the basket under the balloons. Students, using tablets or mouse-based devices, need to drag the basket and balloons to where they think JiJi’s platform will roll to, and press go. The fractional pieces of the circle under JiJi’s platform roll out along the number line. In this case there are two one-third pieces, and if the basket is correctly placed, JiJi is lifted up and away, and they move on to the next puzzle. Otherwise the basket lifts up but without JiJi on board, and the students must try again. The puzzles get progressively harder, with different sized fractions, positive and negative pieces, and fractions given as symbols (like ¼). The game is even played in reverse, where students have to determine how many fractional pieces are needed under JiJi’s platform to get to a basket, already set in position on the number line.
The challenge of the game is simple and easily understood with no written or verbal instructions, even by third-graders – figure out how to get JiJi to the basket. The engagement is unbelievably high, and the strategic thinking is all focused on translating between visual fraction models, symbols, and the number line. This type of game design works at the Elementary level but also is very successful for Middle and High school mathematics, as evidence by an upcoming game dealing with parabolas in Algebra. Points on a quadratic graph are represented by balloons that need to be burst by positioning a rocket, using either a manipulative tool, or a symbolic equation depending on the level. 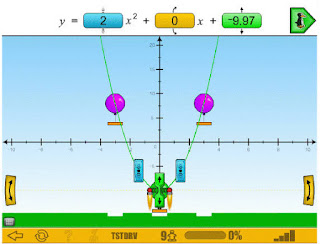 By activating students’ critical thinking skills in these game-based learning experiences, we can help them build deep conceptual understanding of the mathematics. And because all 800 games in the program are built around mathematically accurate and appropriate schema, or visual models, which the students internalize, mathematics now has a context in which to make sense. For the first time, technology is being used to create a new type of learning experience, arming students with the thinking skills they need for success with the Common Core and the 21st century skills they will need for success later in life.