It was rumored that more than 18,000 people signed up for the annual ISTE conference this year, up significantly from last year.  The exhibit hall was buzzing with big booths from all the usual suspects in education including: Google, Blackboard, Pearson, HMH and others. The traffic and engagement among attendees this year appeared much higher than 2011.
The mostly positive keynote Twitter traffic featured Sir Ken Robinson, Dr. Yong Zhao and Dr. Willie Smits with Christopher Gauthier, the enthusiasm about innovation, change, new technologies and more remained high.
Top trends from the conference this year included:

ISTE is still an edtech conference that has been slow to embrace online and blended learning but that’s changing. Let’s call up Malcolm Gladwell and tell him we’re witnessing a “tipping point.” In a survey by Project Tomorrow in partnership with Blackboard, the majority administrators said online learning is a viable option in their schools.
Pearson launched it’s newest online learning tool, GradPoint, which will provide an interactive learning environment with lessons, games and grading options for students in blended learning environments, credit recovery programs or at-risk courses.

There was lot of “Common Core aligned” stuff at ISTE and a lot of “college and career ready” messaging.
It’s safe to say that most people in American have worked on a Microsoft Word Doc, Excel Doc, PowerPoint, Microsoft Windows operating system. Most teeny boppers don’t go a day without gaming away on their Kinect. In full awareness of this impact, the company updated its Microsoft IT Academy to help high schoolers gain certification in the very skills needed to be successful in college and career. Not only this, but the Microsoft impact is just about to expand with its recent launch of Office 365 free for everyone in education.

Lots of learning games providers and content developers hone in their focus on reading and math, yet repeatedly during the discussions I had at the conference, individuals would say something to the effect of, “we have a reading program, but let me tell you about our new research and tools in math.” Math is on the front end of the STEM discussion and new research suggests that it’s one of the greatest predictors of student success.
With that said, LEGO Education, a longtime leader in STEM, is moving into English and Language Arts. This week, the company previewed its new Story Starters tool, which allows students to create physical and digital storyboards with LEGOs. Yet, you’ll be hard pressed to find any details about the new tool online, because it’s set to launch in January. Also on the reading front, the once popular Living Books are going to the iPad in a new movement to revive the efforts with Wanderful Books.

The American College of Education is working hard to bridge the gap between undergraduate schools of education, which are largely oriented around the old, traditional model of teaching, to the digital learning age. The college’s leaders view it’s students as “scholar practitioners,” who are learning and implementing learning into their active classrooms at the same time. This group has a whole set of ideas to raise the perception of teaching to a profession, building education practitioners and learning curators. Check back with us for more on their ideas later.
What’s more, Bloomboard, Teachscape, Pearson Principal Compass and others are working to develop new teacher evaluation tools – to the benefit of the teacher. Teachscape spoke about the importance of effective evaluation tools that train the observer so that teachers are evaluated effectively and productively. These new learning opportunities and tools hope to ride the wave into the next generation of teaching as a profession.

Multiple times in conversation, tech providers would say something along the lines of, “we work on every tablet, smartphone, computer, desktop, you name it, because you never know what technology teachers might have access to or what students might bring to the classroom to learn … because you know … bring your own technology (BYOD) policies are growing.” I agree, BYOD is increasing  in schools and it would be to the advantage of tech providers, educators and students for tools to be easily accessible on any device students have access to.

Startups are moving the financial needle of the education marketplace. They’ve said that they’ve had enough with the top-down, slow P.O. buying structure of school districts and they’ve decided to name new targets: students and parents. As it turns out, they’re spot on and parents are hungry to take their children’s learning into their own hands – and homes.
Yet, while we’re looking at helping parents and students gain access to better learning tools to supplement the classroom, a leader at Microsoft Education warned that we still need to view students as technology creators. We’ll have more of his thoughts to share with you soon.

Young entrepreneurs (and educators with great ideas) are moving into the education market with the next big thing and an eye on their own corner of the market. But the path to adoption and a revenue model is unclear. Some choose to host their tech tools and content on a network tapped into educators like Edmodo, some jump into a single sign-on platform like Learning.com to make access easy, some go it alone in the Apple app store.
We’re looking forward to comparing the reforms, changes and growths in 2013. What trends did you see at ISTE this year?

Edmodo and Bloomboard are Learn Capital portfolio companies where Tom Vander Ark is a partner. 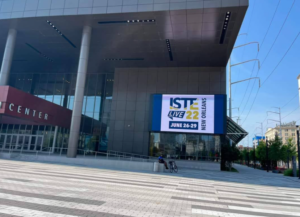 SkillRise: Exploring the Future of Work and Learning with ISTE CEO Richard Culatta

I like how you point out that edtech and blended learning are not the same thing--dazzling new technologies can merely allow educators to teach the same old thing in a new way.
Though I wonder if that's a useful two step process for educators who need time to adjust to 21st century learning: first get used to using tech to teach, THEN use the tech to its full potential by incorporating project based and blended learning.