This morning Aviation High School celebrated groundbreaking of their new $43.5 million facility across the street from the Museum of Flight in South Seattle.
The school, opened by the Highline School District in 2004, is a great example of a STEM focused high school.  Highline is the district south of Seattle and it took years of political negotiation to craft the agreement that allowed one district to open a school of choice within the boundaries of another.
Principal Reba Gilman planned, fund raised, opened and created industry partnerships for this school. I had the good fortune to serve on her board when she ran a three district skill center.  Running a skill center with a variety of prof-tech programs gave her a grounding in applied learning and STEM that she has put to good use at Aviation.
Highline superintendent John Welch was my CFO in Federal Way.  In his second year in public education he won a national award for a budget that the community (and I) could understand.  He participated in the Broad Academy and joined Highline eight years ago.  In his third year as superintendent, he was named state superintendent of the year.  He’s been a thoughtful system and community leader.  His predecessor gets credit for approving this school, John gets the credit for the groundbreaking today.
Aviation is a great example of community as school.  It leverages a county airport, a museum, and a cluster of business partnerships.  The new facility is expected to be open for students in 2013. 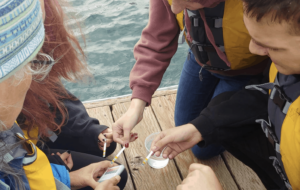