The last panel of the National Charter School Conference (#NCSC) examined unintended consequences of Common Core State Standards especially the new tests that will be introduced in the next few years.  The session was created around concerns that Rick Hess has expressed about the potential for screwing up some high performing charters and concern that I’ve raised about Core-aligned tests blocking innovation.
There is good reason to support the Common Core as Jeb Bush and Joel Klein point out in the WSJ

The good news is that the states are stepping up. Recognizing our great need for more rigorous academics, state leaders and educators have come together to create model content standards. The Common Core State Standards were voluntarily developed by the National Governors Association and the Council of Chief State School Officers, in collaboration with teachers, school administrators and math and English experts. The standards provide a framework of clear and consistent skills for math and English. Already some 43 states and the District of Columbia have signed up to adopt the standards for English and math in lieu of their previous requirements.

Mike Cohen, Achieve, provided background on the Common Core and his groups leadership of PARRC, one of the two big RttT-funded testing consortia.  Mitch Chester, the Massachusetts commissioner and PARRC chair, discussed the intent of “through-course assessments” which will provide interim feedback and be part of a students cumulative grade.
The PARRC instincts about benchmark assessments are right, but my big concern is that they will be misaligned with the learning experiences of most students and an unnecessary addition to a course of study rich in content-embedded and performance assessment.  One could argue that it’s a good idea to ask students to write to a prompt and get some feedback on a regular basis, but wouldn’t it be better to have them writing to prompts embedded in a rich and personalized course of study that incorporated the right question at the right time?
The two consortia are under great pressure to deliver against their giant grants.  They feel compelled to build super Swiss Army tests that do everything—guide instruction, rate teachers, and are used to hold schools accountable.  I think we should do the opposite; instead of building a super-test, we should build super assessment platforms with plug-and-play options.
These new testing systems will be online, so we should use the opportunity of the next three years to shift instructional materials to digital as well.  When we do many students will spend a lot of time on second gen digital content (engaging and adaptive compared to the flat and sequential stuff that characterizes most current content).  Fifth graders will produce 5,000 keystrokes per day; tenth graders will produce 10,000 keystrokes per day.  We’ll have rich portfolios and data sets of performance feedback—all of which can be Core-aligned—that will populate a standards-based gradebook.  I’m no psychometrician, but I’m pretty sure we’ll be able to construct protocols from all of that data to determine:
1) what experiences were most valuable for what kinds of students? (learner profiles)
2) is a school helping all subgroups of students make adequate progress? (accountability)
3) has an individual student demonstrated sufficient knowledge and skill to progress? (matriculation)
4) are teams of educators supporting adequate student progress? (evaluation)

Greg Richmond of the authorizers association thought there might be something to the innovation agenda I laid out, but he’s more worried about getting good Core-aligned curriculum to schools—charters and district run—and soon.
Peter Groff from the Charter Alliance echoed that sentiment pointing out that most charters are not part of high performing networks and receive $2200 less, on average, than traditional schools.  He wants to protect their autonomy, but he’d also like to see them have access to rich curriculum and aligned assessment.
Mike Cohen suggested that if we keep talking about these issues and draw in more state leaders that we should be able to introduce new tests that meet the federal grant requirements and, at least through waiver provisions, won’t block innovation.
I concluded that the solution might lie in differentiated performance contracting as a state education governance and accountability solution (i.e., every school a charter).  If, as I suggested in a NACSA paper, states creates multiple pathways for schools—turnaround, conversion, new, high performing, innovative, special population—the contracting conversations can be used to customize agreements about assessments and data.  There will be plenty of comparable data, but groups of schools will have the opportunity to request replacement of one set of assessments for another.
The Core creates the opportunity for an uncommon curriculum—customized pathways that lead toward a common definition of college and career readiness.  I want to make sure that new assessments don’t block the path as we transition from first generation online learning to rich blended experiences.   Getting more kids to higher standards will require innovative learning experiences tailored to the needs of each student with at least twice as much productive time on task.  Standardized tests that result in standardized experiences won’t get us where we need to go.
For deeper learning and dramatic improvement in college readiness, we need super systems rather than super tests: correlated components rather than common exams, and annual versions that evolve with capability.  We need to preserve access to a uncommon sequence of engaging and successful learning experiences for every student. 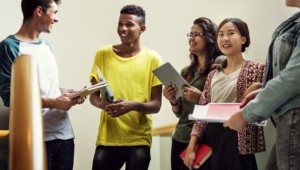 Tackling Digital Equity in the Classroom – Strategies for Teachers