Kathy M. Kristof’s Online College Wins Praise For Affordability, Quality, published in the Tacoma News Tribune, profiles Western Governors University.  WGU has been gaining recognition and enrollment rapidly over the past several years. Orleatha Smith, a WGU student highlighted in this article, is a perfect example of how WGU provides students with access to an affordable credible well-supported college degree and expands their job opportunities.  Below is an excerpt from Kristof’s piece.  See links below for more edReformer stories on WGU.
—–
Halfway into her junior year, Orleatha Smith dropped out of college. She had been juggling a full academic course load at Loyola Marymount University, a pricey private college near Los Angeles, and a full-time job.
And not incidentally, Smith was building up a pile of student debt to pay her tuition.
“I thought I was going to die,” she said. “I just couldn’t do it anymore. It was too much.”
But Smith eventually got her degree from the school that Time magazine once called “the best college you’ve never heard of” – Western Governors University – which takes a different approach to online education.
“I’ve tried them all, and this is great for working folks,” she said. “If you don’t have the time and you don’t have the money, this place eliminates all the excuses. You can do it when you can, and it’s inexpensive.”
CHANGE AGENT
Smith isn’t the only one singing the nonprofit university’s praises. Jamie Merisotis, chief executive of the Lumina Foundation – the nation’s largest education foundation – calls WGU a “disruptive innovator” that’s likely to push the entire education system to change in positive ways.
WGU President Robert Mendenhall also recently won the McGraw Prize in Education awarded by McGraw-Hill Cos. to innovative educators. Judges cited the university’s “flexibility, accessibility and affordability.”
“They have a very promising model,” Merisotis said. “We are excited about it because of the way they have positioned themselves to serve an adult audience.”
What makes WGU special? Although the entire school is online, each student has a mentor who works essentially as a college counselor, helping manage the student’s course schedule and checking regularly on his or her progress. The course instructors hold webinars and online study sessions, and can be reached to help students having difficulty with their studies.
The mentors and instructors mostly work from their homes, keeping in contact with students online and over the phone.
WGU instructors don’t get tenure that guarantees them a job, nor are they encouraged to publish academic papers. Instructors are evaluated based on how well their students do in class and whether their students are satisfied and progressing well in their programs.
QUICKER DEGREES
Even more unusual is what the school terms its “competency-based model.” In a nutshell, that means students study at their own pace. A student can go slowly, of course. But a student who knows the material can get through a class in record time. Whereas a bachelor’s degree takes at least four years to get at a traditional university, the average WGU graduate receives a BA in 21/2 years.
Smith said her classes at WGU were challenging, but she completed one of her full-semester classes in a single week. Because she had been working in a related field for 13 years, she already knew almost everything being taught in the course. That allowed her to write the papers and take the tests for the course in record time.
“Instead of everybody coming to the same class and sitting there for the same period of time, we tailor education to the individual,” WGU’s Mendenhall said. “Why should you sit in a class for four months when you know 95 percent of the material?”
Because the school is a nonprofit that’s focused on making education accessible, it keeps a tight rein on tuition. Undergraduate students pay $2,800 per semester. That pays for as many or as few units as they can manage to take. The average graduate pays less than $15,000 for a four-year degree.
The online classes and the ability to progress at one’s own pace have made the university a favorite among older students, Mendenhall said. The average age of WGU students is 36. Many are already juggling families and jobs. The vast majority – 82 percent – falls into what the education establishment calls “underserved” categories: poor, minority, rural or students who are the first in their families to pursue a college degree.
Read the rest of the story.
You can find more stories on Western Governors University on edReformer: 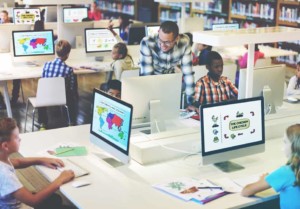