The NYTimes explores whether attending an elite college is worth the cost–an irrelevant question for 95% of American Students.  Most students strive for college but don’t get much tailored advice about their post secondary decision–often the biggest and most important decision of their young lives.  As chronicled by Bok and Bowen in The Shape of the River and Crossing the Finish Line, a large percentage under-select because the simply don’t get the information and exposure they need to make the best possible post-secondary decision.
Michael Carter recognized this dilemma as an incoming freshman in college four years ago and decided to do something about it.  He formed Strive for College and began recruiting his college classmates to support the post-secondary planning of high school students.  Now that Michael has graduated and is full-time Executive Director of nonprofit Strive for College, he’s taking the program national and building out a sophisticated Internet decision support platform.
The following Richard Kahlenberg article summarizes Michael’s amazing journey.  It appeared today in the Chronicle of Higher Education.
—-
As the January 1st deadline for applications at many universities nears, it’s alarming to think about the many talented low-income students who won’t apply to four-year colleges for which they are qualified.
I’ve spent much of the past decade-and-a-half focusing on economic diversity in higher education—with an emphasis on admissions and financial-aid strategies for low-income students. One of the critical ways to achieve greater socioeconomic diversity is for colleges to provide affirmative action for economically disadvantaged students, whom my frequent collaborator Anthony Carnevale calls “strivers.”
I’ve often noted that providing financial aid alone is not enough to improve access for low- income students; in order to receive financial aid, students first have to be admitted. Universities that have generous financial-aid policies, but admit few low-income students, won’t do much for socioeconomic diversity.
But by the same logic, in order for students to be admitted, they first have to apply. In a country where the average student-to-college-counselor ratio is 500:1, many highly talented but economically disadvantaged students fall through the cracks. Because of these and other obstacles, more than 400,000 low-income high school students graduate annually who are qualified to attend four year colleges but don’t.
There are many good programs that help students through the various hurdles to applying for college and financial aid, including an organization that I profiled recently in Maryland called College Tracks. Another interesting new program, based in California, is called Strive for College (whose name resonates nicely with Carnevale’s concept.)
Founded by Michael J. Carter, a recent graduate of Washington University in St. Louis, Strive for College seeks to tap the enthusiasm and experience of college students to guide low-income pupils in nearby high schools through the admissions and financial-aid maze. The program started at Wash U, where students partnered with pupils at Eskridge High School in Wellston, Mo. Before the program began in 2006, only 1 of 30 graduating seniors at Eskridge attended a four-year college, according to Strive. After two years working with Strive mentors, 24 of 27 graduating seniors went on to a four-year college.
Since then, Strive for College has expanded to include student advisors from San Jose State, Stanford, Saint Louis University, UNC- Chapel Hill, Carnegie Mellon, Vanderbilt, the University of Pennsylvania, University of Georgia, and University of Virginia. Carter argues that the program is cost-effective because it harnesses college-student volunteers, and he emphasizes that the use of online programs allows Strive to reach many more students than it would through traditional channels.
Carter has managed to recruit a number of heavy hitters to Strive for College’s board of advisors or board of directors, including former Princeton Review CEO John Katzman, former Gates Foundation officer Tom Vander Ark, and former Knight Foundation president Hodding Carter. The program is slated to be evaluated with the advice of Russ Whitehurst from the Brookings Institution, to see whether, as the program scales up, it can maintain its track record.
Recently, Nobel Laureate economist Joseph Stiglitz delivered a speech to a Strive for College audience in which he articulated the stakes involved. “Our economy would be achieving hundreds of billions of dollars more if those with lower incomes had the same access to education as those of the rest of our society.”
The January 1 deadline, in other words, looms large for more than just high school seniors.
More on Strive on edReformer: A Bridge to College, Picking the Right College is About to Get Easier 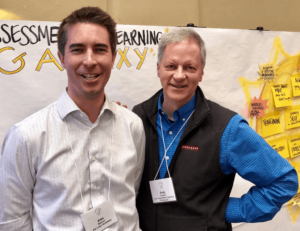