Moving Learning Games Forward: Obstacles, Opportunities, and Openness,” by Eric Klopfer, Scot Osterweil, and Katie Salen of the Education Arcade, an MIT research division that explores games that promote learning through play, explains why educational games have seen an increase in popularity: mainly owing to the advances in consumer games.

A report from the Joan Ganz Cooney Center, “Game Changer: Investing in digital play to advance children’s learning and health,” claims that on an average day, children as young as eight spend as many hours engaged in media activity as they spend in school.

Michael Levine of the Cooney Center said, “[We] believe that the demonstrated potential of digital media wisely guided by caring adults could become a ‘game changer’ in advancing children’s prospects in the decade ahead.”
The MIT report went on to outline lots of barriers to development and adoption.
Bavelier.Daphne Bavelier, professor of Brain and Cognitive Sciences at the University of Rochester said, “We have recently shown that playing first-person point of view action video games affects several aspects of perception, attention, and cognition.”  Bavelier added that while these brain functions could develop with all video games, action games push the speed of learning.
“The [Cooney] report warns that injecting content learning into a game where it doesn’t fit might create experiences that are entertaining, but their educational value is suspect. If your spaceship requires you to answer a math problem before you can use your blasters, chances are you’ll hate the game and the math. This is the strategy taken by most of the legacy edutainment games (Math Blaster), as well as many of the new attempts to create commercially viable learning games today (immersive 3-D math game, Dimension M),” the report says.” The CEO of Tabula Digita, maker of Dimension M disputed the claims.
Despite lots of barriers, virtual worlds, game theory, serious games, and lots of adaptive engaging content will soon be part of many US student’s homework. The 3 Secrets to Scandinavian Innovation in Education 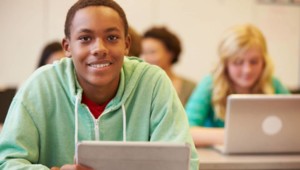 12 Digital Tools to Try in the Classroom