Ted Sizer asked us to think deeply about accepted norms in American Education.  His books and a series of school visits starting in 1999 shaped my views about secondary school reform.
The NYTimes summarized his seminal contribution:

The Essential Schools movement sprang from Professor Sizer’s seminal book “Horace’s Compromise: The Dilemma of the American High School” (1984). In it, he created an archetypal hero, Horace Smith, a high school English teacher. Horace is devoted to his work but frustrated by the limitations of the American educational system, many of them holdovers from 19th-century pedagogic practice.

Horace’s story provides the narrative armature for a battery of sobering statistics, amassed by Professor Sizer in the course of an extended study of dozens of American high schools. The “compromise” is the tacit compact between teacher and students that was the order of the day in far too many schools, Professor Sizer and his associates found. Do not make trouble for me, the teacher’s side of the compact went, and I will demand little of you in return.

While much of the school formation work I attempted to foster followed Ted’s lead, our views on education reform diverged a bit over the years.  With more school leaders like Ted and Debbie Meier we wouldn’t need the measurement and accountability systems that were imposed in the 90s and ensconced in NCLB.  Authentic performance assessment of project-based learning results in the most compelling learning experiences for young people.  However, efforts to promote these practices at scale inevitably suffered from a lack of rigor that were central to Ted and Debbie’s schools.
Ted taught me that networks are important.  He founded the Coalition of Essential Schools as a knowledge sharing platform around the Horace ideals.  Ted and Debbie believed that good schools are recreated every day through democratic debate.  He was skeptical of replication while I became convinced that managed networks (e.g., Green Dot and Aspire) and franchise networks (e.g., KIPP and Big Picture) had enormous potential.
To the end, Ted was a teacher–warm, insightful, and passionate.  His legacy is thousands of schools that ask young people to think. 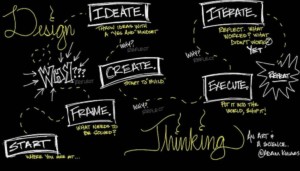 Design Thinking and Its Impact on Education Innovation

Thanks, Tom. Sad to see Ted go.
When you say that "efforts to promote [authentic performance assessment of project-based learning] at scale", which efforts are you primarily referring to?

Read the CES principles, they're all Ted. (http://www.essentialschools.org/pub/ces_docs/about/about.html)
He asked kids tough questions and demanded quality work. He invited community review of this work and required students to use it to make their products (and their thinking) better. Kids in a CES school show what they know.