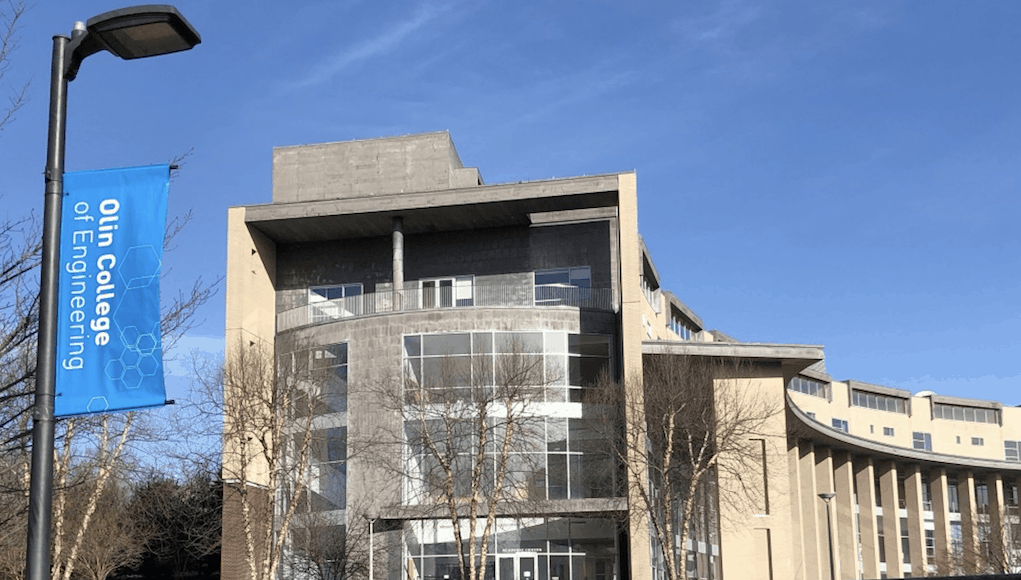 “Learning things that matter; learning in context; learning in teams. Envisioning what has never been and doing whatever it takes to make it happen. Do that 20 times and you will be employable forever,” said Richard Miller, President of Olin College of Engineering.

More than twenty years ago, Miller began thinking about this formula. The mechanical engineer was dean of engineering at the University of Iowa. About the same time, the trustees of the F. W. Olin Foundation began contemplating a new approach to engineering education. They formed Olin College and Miller signed on as the first employee.

By the end of 1999, the new institution’s leadership team had been hired and site development work commenced on 70 acres adjacent to Babson College in Needham, Massachusetts. Olin’s first faculty members joined in September 2000.

In a nod to how different Olin would be, they invited 30 students to help design the curriculum. Living in modular buildings, they joined the faculty in studying new approaches to engineering education. A full class was enrolled in 2002.

With about 350 students, Olin is small in size but large in impact. It was recognized as the most well-regarded school of engineering education in the world (edging out MIT in a 2018 report sponsored by MIT).

The study focused on current as well as emerging leaders, with Olin and MIT most frequently cited. Other schools making the list include some you would expect like Stanford and less well known schools such as Aalborg University in Denmark and Delft University of Technology in the Netherlands.

Olin was cited for its “multidisciplinary student-centered education that extends across and beyond traditional engineering disciplines and is anchored in issues of ethics and social responsibility.”

Think of Olin as a lab school and a professional learning center. Over 900 institutions have visited and participated in a learning experience on campus.

Walking around campus, you’ll notice a diverse, gender balanced student body. You’ll probably see them engaged in one of the three dozen design-build projects they conduct. If you visit at the end of a semester, you’ll see students presenting a public product.

Olin begins with hands-on challenges from day one and it culminates with a two-semester Senior Capstone in engineering (SCOPE) where teams engaged on impact projects with corporate partners, government research labs, NGO, and startups.

“No amount of emphasis on narrow specialized courses will produce the innovators we need,” said Miller.

He envisions Olin as a tugboat nudging the aircraft carrier of higher education toward relevance in the innovation economy where intrinsic motivation powers design-based contributions. (See slide from Miller’s AACU presentation below)

Education for the innovation economy is not just about knowledge and skill, argues Miller, it’s about mindset–collaborative, interdisciplinary, ethical, empathetic, entrepreneurial and global.

Developing these mindsets means an education that asks a new set of questions:

Join the crowds visiting Olin to see the future of higher education. It’s worth checking out their Summer Institute on Designing Student-Centered Learning Experiences, June 10-14.