The word agentic is described as an individual’s power to control his or her own goals actions and destiny. It stems from the word agency, which Webster’s Dictionary defines as the capacity, condition, or state of acting or of exerting power. In the late 1980s, Stanford University Psychologist Albert Bandura began developing a theory of social cognition that he associated with self-efficacy. He later examined more specifically the role of agency and motivation, and coined the term Agentic, in which people are viewed as self-organizing, proactive, self-reflecting and self-regulated, which he calls Agentic. Agentic learning is defined by self-directed actions aimed at personal growth and development based on self-chosen goals. Within this context, students initiate actions of their own volition that drive their learning.

Creating the Conditions for Agentic Learning

In their 2011 paper, Reeve & Tseng identify four domains of engagement that influence motivation and behavior.

Understanding these domains of engagement, how an individual engages in these domains, and how they interact or integrate into the learning environment are foundational to creating the conditions for Agentic Learning to emerge.

In his book, Drive, Dan Pink outlines how autonomy, mastery and purpose are fundamental to intrinsic motivation – another foundational block of student agency. Student agency implies an intrinsically motivated volition on the part of the student, which goes beyond student engagement – where a student is engaged with the work for its own sake, not just for extrinsic motivators such as getting good grades or pleasing teachers or parents.

In addition to engagement and intrinsic motivation, student agency is fostered through relatedness, which is a strong relationship with at least one adult in their academic environment. Self-determination theory cites relatedness, along with autonomy and mastery, as fundamental psychological needs.

Student agency is when students of their own volition initiate actions that support their learning within the context of their learning environment. It is fostered through engagement, intrinsic motivation, and relatedness. Agency is a critical goal in its own right in preparing students for career and life, but is also made of building blocks that in and of themselves lead to deeper learning.

Fostering student agency may seem like a daunting task. Fortunately, there are many pedagogical approaches, such as Project-Based Learning, Inquiry, Design-Based Learning and others that, when implemented well, lead to engagement and intrinsic motivation. Combined with a strong relationship with a teacher, these approaches provide opportunities for students to develop agency.

Marie Bjerede is President of Agentic Learning. Connect with her on Twitter: @mbjerede 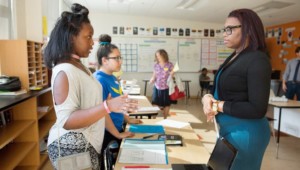 Expanding Our Notion of Student Agency

Very interesting read Marie Bjerede! Thank you for bringing material of this caliber. I'm looking forward to more on related topics, my best to you. Kudos!