A recent EdWeek survey demonstrated the overwhelming support that Google has developed among U.S. educators in the last few years. Asked what company they’d hire to help improve student achievement, more than half pick Google. The survey makes clear that Google is becoming the dominant player in the EdTech market. The reasons are clear: Google products are cheap or free and perceived as easy to use.

The report confirmed our findings during school visits this year that Chromebooks have won the device race. With a price tag of just under $200, they are affordable and allow schools to go truly 1:1.

Behind the adoption of Chromebooks is the rapid adoption of Google apps for education (now G Suite). When asked which productivity tools they use, U.S. educators responded that almost seven out of 10 now use Google. What The Tech Giants Offer

Google creates the operating systems used in the Chromebook devices that now have a dominant share of the U.S. K-12 market, and it also offers the popular productivity tool, G Suite, of which Google Classroom and many other features are a part.

Microsoft has long been a leading producer of operating systems in the U.S. and international markets. It also offers a productivity suite, Office 365 for education, widely seen as a competitor to Google’s G Suite for Education. Just this month, the company announced a new operating system and set of classroom tools—regarded by industry observers as an answer to Google’s platforms–that the company argues will give educators simple-yet-rich options to help students.

Apple iPad and Mac devices are widely used in schools, and Apple offers a variety of apps and tools for students, including ones focused on coding, music and video. It also offers features to help teachers improve their skills and instruction and their use of Apple devices.

Amazon has expanded its footprint in K-12 districts through Amazon Web Services, a cloud-based storage, data and analytics system, used by many school systems to replace physical storage. Amazon has also sought to ramp up schools’ ability to use its online marketing for purchasing, and it has announced plans to create a platform for open educational resources.

Inexpensive devices and free productivity tools have helped American schools narrow the digital divide and power 1:1 learning models. They’ve made a big contribution to the first generation of blended and personalized learning.

However, all the free software has likely had a dampening effect on innovation in learning platforms. It’s harder to sell a subscription-based platform when you can use a simple but free tool from Microsoft or Google. All of the tech giants view education as a lost leader–a place to win early users but not a lucrative market. As a result, none of them will invest in or risk their reputation on a comprehensive learning platform (see the eight platform advances needed to power personalized learning).

We are left with pretty good and pretty cheap EdTech, but we don’t have the tools to really transform learning. The influence of the tech giants is the main reason we don’t have two or three sophisticated learning platforms in education.

Of four ambitious K-12 efforts to build national platform networks (Summit Learning, New Tech Network, Cortex and AltSchool), only one is a venture-based startup. The others will rely predominantly on philanthropic support–which is great but will pale in comparison to the R&D spending by Facebook, Uber, Airbnb, Oscar and other platform leaders in other sectors.

All in all, the subsidized education software is a mixed blessing. It closed the divide but it’s a bit of an anchor to innovation. 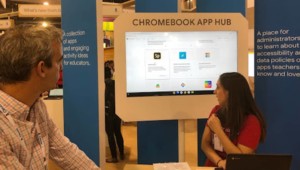 You can't ignore Google in any field, Google is a big fish.