Have you ever approached someone with a great idea and received a response along the lines of  “that’s really neat, but seriously? I don’t think you could pull it off”? If you have, you’re not alone. This is a response issued often to students who believe they can make a difference in the world. Creative ideas are often met with a list of limitations that make that idea “impossible” to achieve.

When we’re in kindergarten, new to the education system, we believe we can be anything. Personally, I thought I would make a great queen. I had friends who were going to be rock stars, writers, explorers, soccer players, and a few who wanted to be mothers. In short, all of us knew we were going to be something special. So why is it that eleven years later my peers doubt themselves when they want to start a club, or proclaim their inevitable failure on a test before they take it? My theory is when we are young the world is our playground. We own it. It’s ours. But as we grow up, the walls around us keep climbing higher and higher. Today, each time I voice an idea for a project, it seems I am given a pat on the back and handed a list of regulations I will need to overcome just to take the first step.

In the face of these limitations, we begin to doubt ourselves. This mindset becomes our greatest limitation. Students, in response to this epidemic of self doubt are losing a sense of purpose in their education. They are failing to recognize the value in their learning because they are not trusted with a voice in it. Students are learning to doubt themselves and to give up the first time they encounter failure. They are learning to acquiesce to limitations. As we approach adulthood, this mindset is leaving us unprepared to face the challenges of the 21st century with the skill sets we will need to be successful. If we are going to thrive in this fast paced world, we will to need to know how to act on our ideas. This begins with believing in their potential.

So let’s imagine a world without limitations. A world where ideas can resonate and make an impact. A world that is accessible to students.

This is where design thinking starts.

Design thinking is a process of problem solving that places an emphasis on understanding real world problems in the attempt to collaborate to create meaningful solutions. To be successful with this process, it is imperative that you trust your voice and the voices of your peers. If we box ourselves inside the limitations we convince ourselves of, we will not have room for the creativity our world needs. The crazier your ideas are, the more original they become, giving them the potential to be revolutionary. Imagine what our world would look like if the Wright brothers had believed gravity to be a limitation; we would lack our fastest mode of transportation.

Within trusting our own voices, it is also important for us to listen to the voices of others. We can collect an artillery of perspectives to use to attack the problem, and, perhaps even more importantly, we can be inspired to create new ideas and build on the ideas of others. Collaboration in design thinking is a bit like playing with Play-doh; ultimately everyone’s ideas are squished together to create a colorful sphere of solutions. The more colorful the solutions, the more likely they are to be effective.

I was formally introduced to the process of design thinking at an event held at the beginning of October. The 24 Hour Think Challenge, organized by a student led non-profit in Idaho called One Stone and The J.A. and Kathryn Albertson Family Foundation. The event brought together 150 high school juniors from across southwest Idaho to tackle issues facing education in the 21st Century. We discovered that one of the most crippling issues in the education system is a lack of student motivation. One look around any high school classroom will reveal a disconnect between students and their classes. As we learned to listen to our own voices, my group hypothesized that there might be a direct correlation between student voice and motivation. Therefore, our solution at the Think Challenge consisted of a student designed and driven education. Our idea was to create an online platform for learning which allowed students to follow a core track of need-to-know subjects, but design their own projects to learn the materials. Another element of the system allowed students to contact key members of the community to work on implementing their projects or ideas into their surroundings. However, this idea could take on many different forms. The ultimate goal of our project was to allow students to feel as though they have a voice in their education and to encourage them to recognize the impacts of their learning. Because, as students, we need to know that our ideas matter. We need a system of education that will cultivate creativity rather than disbanding it. Next time someone tells you “you can’t”, prove to them that you can. If you have an idea for a project, find people who will work with you and get it done. Pursue your passions. Take charge of your learning and strive to make your education about more than a diploma. Make education about your life and the impact you will be able to make on the world.

Students, this is our education and our world. It is time for us to own it.

About “GenDIY”
Young people are taking control of their own pathway to careers, college and contribution. Powered by digital learning, “GenDIY” is combatting unemployment and the rising costs of earning a degree by seeking alternative pathways to find or create jobs they love. Follow their stories here and on Twitter at #GenDIY. For more on GenDIY check out:

Sara Matlock is a junior at Boise High School in Idaho. Actively involved in her community, she enjoyed participating in the 24 Hour Think Challenge 2015. 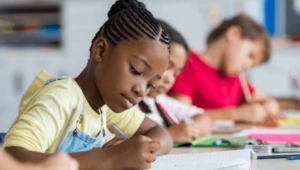