Children in Utah were coming to kindergarten unprepared to learn but many parents were unwilling to send very young children to school. Transportation was another issue in rural parts of the state.

To address the Kindergarten readiness issue, the legislature created UPSTART, a five year pilot program to test the potential of literacy software used at home.

The Utah State Office of Education issued an RFP process. Salt Lake City based Waterford Institute was selected to administer UPSTART. The nonprofit has over 30 years of experience in interactive literacy instruction.

Preschool-age children in the program receive an individualized reading, math, and science curriculum with an emphasis on reading. Computers and internet were provided if needed.

Compared to a control group, an evaluation found medium size effects on improving the phonological awareness skills of participants. The largest impact observed in fourth year of operation was in the development of vocabulary.

Nearly 100% of surveyed parents felt that the children enjoyed the software and that the program helped prepare their child for kindergarten.

Evaluation and Training Institute said, “Based on the fourth year results, the evidence suggests that UPSTART’s use of education technology in a home based approach has considerable merit for facilitating the development of school readiness in young preschool children.”

With an average cost of $886 per student, the program costs about a tenth of preschool. The plummeting cost of mobile technology and spread of affordable internet suggests costs will continue to decline.

The program received a Federal i3 Validation Grant based on the strong evidence of results. The legislature also renewed their support for the program last year in Senate Bill 148.

Sen. Stephenson said the legislature has used a similar strategy to introduce personalized learning technology into about a third of Utah schools with similar levels of success. 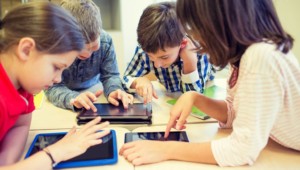