My local newspaper’s mission appears to be “cover controversy.” They only cover crime and criticism; they avoid constructive stories that build context.  Unfortunately school grading policies is an easy target if you like controversy.

For the second time in twenty years, my community is arguing about grades–the first time I was superintendent.  In 1994, Washington introduced expectations for English and math and I thought we should provide feedback on whether kids were meeting those standards. The change caused quite an uproar because 1) the expectations were higher; 2) the feedback was about what kids knew and could do, not attendance or extra credit; and 3) the reporting system was a lot of work and hard to understand.

You might ask, “What problem are we trying to solve?”  The first answer is that traditional grading systems are inconsistent, often subjective and more about effort than outcomes; and not closely linked to the big goal of college and career readiness. For most secondary students, the goal is to figure out the grading game and do the least to get the grade they need.

Let’s back up and put grading into context.  School districts with effective leadership are trying hard to embrace higher expectations and use new tools and strategies to personalize learning for all students. A paper I co-authored put it this way:

The current factory model of schooling – with its time-based, bell-curved grading system – will undermine all of our efforts to personalize education. No matter what standards we use, no matter the innovation, a conveyor belt model limits student achievement in two fundamental ways:

“The grading philosophy is one of the most important decisions,” the paper continues, “as it defines how students understand what is needed to be successful, but it’s really the promotion policy that is most important.” My local district was used as a good example of a district attempting to provide valuable feedback to students and avoid moving students along that aren’t adequately prepared.

Time to learn. School districts are trying to shift from time to learning–from moving kids along when they get a year older to progress based on demonstrated competence.  iNACOL, where I’m a director, is the leading advocate for competency-based education.  We sponsor an online community, CompetencyWorks, where educators share views on how to design better schools. You can find blogs on grading systems here.

Many schools use a 1-4 scale to indicate not enough evidence, not yet proficient, proficient, or exceeding proficiency. Parents and students may think this is just the same as A-D, but it’s not. Designing a grading strategy and communicating it effectively is an important step in reshaping the culture of schools and districts.

Much of the grading controversy is driven by college admissions. That’s slowly changing. Last week, 48 New England colleges announced that they would be accepting proficiency-based diplomas.  While we’re waiting for higher ed to change, school districts will need to provide translations that give their graduates a shot at selective schools.

Report cards that provide standards-based feedback need to be simple to produce and easy to understand–and 20 years after our first attempt, it’s still harder than it should be.  Fortunately, there are a few companies like MasteryConnect attempting to reinvent the report card and using simple data visualizations to chart progress.

Shifting from the grading game to reliable standards-based performance feedback is proving to be a challenge, but it’s an important part of an education system that embraces high expectations and personalizes learning for all students.

MasteryConnect is a portfolio company of Learn Capital where Tom is a partner. 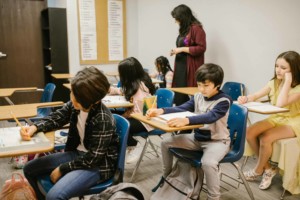 Our county just started this system only for K-2 students, while grades 3-5 (and above) are simply on a ten point scale with letter grades. How is that an adequate use of standards based performance for college and career readiness? Is there any explanation as to why my students in second grade are aiming for "all 4's" when next year they aspire for As and Bs? I also find it productive, sure, if one universal system is used in a K-12 setting. However, wouldn't a ten point scale be somewhat more accurate vs a scale which is based on a 25 point difference? I can see using MasteryConnect as a nice resource, but shouldn't our grading systems (ie PowerSchool, etc.) do this for us so that teachers can focus on student success and not having to wear yet another hat of 'translator' for parents once we have analysed our students progress with formative and summative assessments?

Thanks for your comment. I don't understand the local issue as well as you do but will investigate further.

You comment about 48 New England schools supporting the proficiency based grading - as a point that colleges are starting to recognize these new grading systems.. Great! Did you look at the list? Not one top college among them...no Colby, no Bates, no Middlebury, no Dartmouth, no Brown. I could go on and on. So, if your child is looking for a middle to lower level college, this new grading system might be for you. But, it your child has high aspirations...good luck if they graduate in the next few years!

Thanks Rebecca, you're right, if you want to go to a selective college you need to play their game--but many are looking at broader measures. Brown says: "Rather than relying solely on a set of quantifiable criteria like grades and test scores, our admission process challenges us to discover how each applicant would contribute to—and benefit from—the lively academic, social, and extracurricular activity here at Brown. We will consider how your unique talents, accomplishments, energy, curiosity, perspective, and identity might weave into the ever-changing tapestry that is Brown University."
They may still need to produce a GPA & SAT, but I think every student should leave high school with a portfolio of their best work, a list of work experiences, and a collection of references. It will serve them well where ever they go.