I felt a disturbance in the force this week, and it was much closer than Alderaan. There were a number of questions being raised about the success of 1:1 laptop and tablet initiatives. Some were questioning its value. Some don’t want to start an initiative any longer. Another wanted to abandon his.

It’s not time to panic. It’s just time to plan. And if your plane has already taken off, it wouldn’t be the first time that we finished the aircraft while in flight.

If people were drowning, we would immediately start a 1:1 lifejacket initiative. We wouldn’t abandon it if the people were still flopping around in the water like wounded fish after they put on their lifejackets. Struggling swimmers flop around because they were not prepared by their leaders and mentors. We especially wouldn’t abandon the lifejacket plan if our only other plan was rearranging the deck chairs on the boat while we let the swimmers sink to the bottom with hopes that somehow they would pop out the other side and be “life ready.”

If you have any doubt about today’s computer/tablet 1:1 initiative, don’t waiver. Hold the course. There are a lot of success stories in the U.S. and abroad. Bravo to the superintendents and schools leaders who said, “I’m all in. Let’s do this.”  You no doubt met resistance along the way. You were the early adopters, and we’re all building on your successes and learning from your mistakes. Both are totally invaluable.

When I was at Indiana University in the early 1980s, Mark Spitz (winner of seven swimming gold medals in the ‘72 Olympics) was still a big deal on campus. A reporter once asked him if at the end of a race if he ever just forgot about form and swam with wild abandon to reach the wall first. That seemed like a reasonable question. You could tell, though, from Spitz’s reaction that this was a novice question. He said no, that the end of a race was the most important time to maintain your form, and everything that you’ve done in training will pay off. That’s why you train relentlessly. It would be crazy to abandon that.

This is not the time to abandon form.

If you’re contemplating a 1:1 initiative, don’t get hung up on the word “initiative” or “movement.” This makes it seem like we’re on the leading edge of something, going where no one has gone before, and not playing catch up to the rest of the world. And by rest of the world, I mean private enterprise, state workers, federal workers, the whole of the entertainment industry, the military, coal miners, 53 other industry sectors, and internet boutiques on the Khyber Pass. These outfits are incredulous as to where we’re at with our internet and technology capacities. “Your initiative is to put a computer in the hands of each student? Maybe 1995 will host a telethon for you to raise money and awareness. Does the United Nations know? Maybe they can help.”

It’s not like those industries are remaining stagnant either. They are plowing ahead with new technologies and new ways of thinking, collaborating, and working. Take a look at the difference that eight years makes in these two pictures taken at the same spot in St. Petersburg Square:

That picture reminds me of what Richard Boyd wrote in SuperHuman Education. Boyd writes:

“Those individuals who take advantage of this revolution and gain a comfortable fluency and literacy with these new interfaces will appear superhuman to and outperform those without them. Conversely, those who do not keep pace with technology will appear disabled. This will be true of individuals and organizations as well as nations.”

If you need help with your 1:1 initiative, start with Project Red.  See how Sunnyside, Irving, Walled Lake, Mooresville, and others did it successfully. Get a detailed step-by-step implementation plan, and connect with your counterparts (superintendents, principals, finance officers, curriculum directions, technology officers, and educators) in other districts who are implementing similar plans.

Project Red emphasizes financing, curriculum planning, PD for teachers, training for students and parents, creating help centers, and good PR that keeps all stakeholders informed. The PD will help teachers seamlessly match the right digital tool to their lessons. This is similar to how a serious athlete chooses the right gear to match a workout. If it’s a long run, a heavier training shoe is used. If it’s a fast workout on the track, a pair of racing flats or spikes are used. The athlete doesn’t wear a $200 pair of spikes on a slow road run just because the spikes are new and expensive. They are a tool, and they have a purpose. The athlete thinks that way, trains that way, and then races that way on performance day. If you’re not sure when to use technology in your lessons, Mark Anderson has created an interesting flow chart that helps determine when and how to use technology, when it’s transformative, and when it augments.

The 1:1 initiative has ramifications beyond the classroom, as it should. We have jobs in this country that we can’t fill because there’s a technology gap between workers’ skills and available jobs. Think about that.

In TODAY’S economy we have jobs that are unfilled because of a technology gap.

Students who do not have digital skills will be at a disadvantage to those who do. That’s true in both the job market, college application market, and academic performance.

This is the world that’s waiting for us just around the corner:

Are we preparing students for that world? Keep in mind that 60% of the jobs ten years from now do not exist today, most of which will involve digital technologies. That’s an impact on today’s third graders. This is not new. The principles of Moore’s Law can be traced back to the early 1900s when applied to all technologies (not just processor cost and capacity).

Flipboard user?  Follow me here http://flip.it/SRjeu on your Flipboard app. 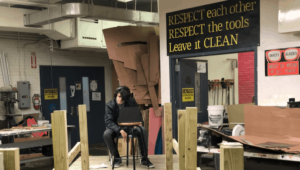