How did you first come across the idea to include voice feedback for students?

Writing instructors have told us that one of the most effective ways to provide student feedback on writing is through one-on-one conferences.  And that what is valuable about the one-on-one conference is the opportunity to connect with the student through: tone of voice; explanations of feedback left on a paper; a sharing of the thought process that guided the instructor’s evaluation of a student’s work.  Providing this type of feedback—in light of increasing class sizes as well as students’ decision to opt for virtual learning—has become increasingly challenging for instructors.  Also, research (starting in the 70s) has continued to show the efficacy of using audio feedback to reach students.  We wanted to help narrow the distance between instructor and student, and introducing a voice comment feature in Turnitin was a pedagogically-reinforced way to do just that.

Do you expect that Voice Comments will be used primarily in traditional schools or in online or blended programs?

For online and blended programs, where interaction with an instructor might be limited, the Voice Comments feature adds tremendous value.  In fact, some of our users have told us that the voice feature will provide students with the only opportunity to hear their voice in their online class. That said, we think that instructors in traditional schools will also highly benefit from the added voice feature.  Our users have already told us that the ability to leave voice comments is a big time saving tool (as compared to typing them out).  They’ve also told us that having this feature will help them better accommodate different learning styles.  Students, such as English language learners (ELL), can greatly benefit from feedback that is provided in more than one modality, and adding a voice comment accomplishes this.

What’s the psychology behind hearing the voice inflections and tone of feedback?

Instructor feedback is most effective when there is student investment in reviewing, processing, and then applying that feedback.  Audio feedback has been shown to be an especially effective way to engage students.  In a study by Ice, Swan, Kupczynski, and Richardson (2008), they found that students associated audio feedback with the feeling that the instructor cared more about the student.  They also noted how audio feedback was associated with feelings of increased involvement and that students were “far more likely to apply content for which they received audio feedback than content for which text-based feedback was received.”[1]

How can Voice Comments improve the way that students receive and internalize feedback from an educator?

Even as feedback on student writing has moved from the confines of paper marginalia to online services like ours that enable instructors to provide more substantive (and legible) feedback, instructors are still having to contend with the issue of students not reviewing paper feedback.  One of the primary reasons why this happens is because students have difficulty interpreting their instructor’s remarks, whether this means deciphering what a “C/S” (comma splice) mark in the margin might mean to better understanding what it means when an instructor points out that a student’s “thesis” statement is not a thesis.  Adding a voice comment is a way for instructors to provide necessary detail to their comments.  The instructor can use the voice comment to explain why, for example, so many “C/S” marks were left and what the mark means or go into a more robust explanation of why a student’s thesis statement is not sufficient.  In doing so, instructors can create greater student engagement with the feedback, helping them to process and then internalize it.

Do you expect that Voice Comments will save educators time while allowing them to give more detailed instruction?

Yes, instructors have already told us how much time they expect to save recording, rather than writing their comments.  Voice Comments also allow an instructor to provide a student with more balanced feedback.  For example, an instructor can use a voice comment to balance out—with tone of voice and additional explanation—some of the more critical written comments that may have been left on the paper.  The critical comments are crucial for helping students to improve their writing, but students often don’t know how to interpret them.  With a voice comment, instructors can balance that criticism out, facilitating the more effective uptake of written feedback. 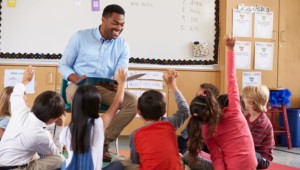 What an innovative idea/software. I would add one perspective though. I totally understand why the initial thought would make people think that blended/online teachers will reap greatest benefits from Voice Comments; but in the past 8 years of teaching a F2F social studies course I have found many of the same issues that are described in the article of blended and online instructors. Our issues are also, too many students and not enough time to meet with each individual to go through their writing assignments. I have never experienced the workload of an online teacher, but I can tell you that F2F teachers will appreciate the time savings and improved student performance by the manner of leveraging technology as offered by Voice Comments. Thanks for the cool new tech tool.
-Will Herring; I am a member of Dr. Setser’s Summer ECI 509 course at NCSU

I think this tool would be great for any class and any curriculum. Especially in non-language arts classes where teachers still require writing assignments but may not have the time to meet with each student face to face in a reasonable amount of time. In our 1:1 program a teacher could record their comments and then all of the students could listen and respond to the recorded feedback at the same time. Very exciting ideas!
JS ECI509

Turnitin is a fantastic software program that is used on a regular basis by our teachers and students at my workplace. Adding the Voice Comments feature will make it especially appealing. It appears that Voice Comments has many great benefits such as allowing teachers to provide quick feedback, save time by not having to write out comments and by adding a personal touch to teacher/student interaction in a blended or online learning environment. One of the greatest benefits, though, is making feedback to students more effective. Quick feedback is very critical for learner motivation. Also, having voice feedback definitely will make it easier to provide critical comments that can then be tempered with praise. Both praise and criticism are necessary for a student to learn, grow and stay motivated to go on to more challenging assignments. Voice Comments sounds like it will add a positive extra dimension to that feedback process.
Marion Dickmann, Dr. Setzer's ECI 509 class.

Agree, the idea of voice comments is cool. When combined with online writing assessment that provides instant feedback on every essay (see How Formative Learning Supports Writing to Learn, http://www.gettingsmart.com/gettingsmart-staging/blog/2012/04/how-formative-assessment-supports-writing-to-learn/), voice comments could focus on higher order skills: voice, plot/argument development, and style.

I have never used either program but I know that writing conferences work, but they are extremely time consuming. I like the fact that technology is starting to viewed as a teaching tool and not as a silver bullet. This program is exactly what teachers need; solid teaching methods reinforced and made more effective by technology. I know that one of the main determining factors of whether an assignment is valuable to a student or not is the feedback and timelyness of that feedback. Using voice comments would be a great way to differeniate for students and also a way for the studenst to take the feedback with them and hopefully reflect on their progress. This seems like a great tool. Thanks for sharing.

I haven't heard of this software before but love the idea behind it! I agree with you that the voice commands and voice tone would be beneficial to students in gaining that personalized feedback. I agree that conferencing with students is very important in the writing process and this would be a great tool for students to understand where they need to edit and have the ability to replay the comments until the editing is complete. Thanks for sharing this tool and its useful features!
Melissa Harrelson
NCSU
ECI 509-Dr. Setser