The success of Obama’s first term education agenda will be sealed with the announcement of phase 1 Race to the Top winners in March.  All indications are that the Obama administration will hold firm on its landscape changing competitive grant program.  Only a handful of states will receive grants in the first round.  The dozen or so rejected proposals will confirm that the administration is serious about reform—specifically strong accountability, school choice, and a performance-based employment (the Education Equality Project agenda).
Commentators including David Brooks note that leaders he spoke with are “impressed by how gritty and effective the Obama administration has been in holding the line and inciting real education reform.”  Pressure to spread funds broadly will undoubtedly grow, but Duncan has a great team leading this program and very strong legislative language in the stimulus bill to fall back on.
About 20 states have already made important reforms in preparation for application.  Here’s a summary of the flurry of pre-RttT activity including

More than 15 states have benefited from foundation grants to support development of Race to the Top plans.  State teams are scrambling to assemble the capacity to administer giant grant programs and encouraging local superintendents to sign on to aggressive reforms.  Governors, who will be singing off on the proposals, are weighing the cost of the labor struggles to come.
Race to the Top and related grant programs push for performance-driven evaluation and compensation—a huge change from the lock step back-loaded tenure-based employment common nationally.  The grant programs also push for aggressive action to improve low performing schools including ‘turnarounds’ that require replacing half of the staff and ‘restarts’ that involve closing failing schools and turning them over to an outside operator.  Both would require huge dislocation of staff—an enormous challenge in districts where it is nearly impossible to terminate teachers (see Rubber Room, The New Yorker).
If the administration holds firm as Brooks suggests, the quiet revolution will continue.  When congress gets around to reauthorizing federal education policy, the landscape will be inexorably changed and the momentum for reform will be well underway.  By the end of the first term, more students have teachers focused on their success and more families will have access to good schools—a revolution indeed. 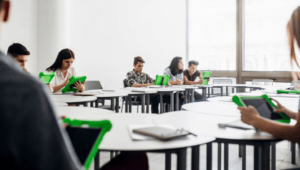