Corey Mohn is Executive Director of the Blue Valley Center for Advanced Professional Studies or CAPS. The next generation career center supports 5 suburban Kansas City high schools with what they call professions-based learning. “Students fast forward into their future and are fully immersed in a professional culture, solving real world problems, using industry standard tools and are mentored by actual employers, all while receiving high school and college credit.”

The next gen career center has inspired a national CAPS Network that includes more than 60 school districts. They include Little Rock Public Schools where Shameka Montgomery is Director of Career Development. Shameka joins Corey in this interview to discuss how career education has changed in Little Rock.

Thirteen years ago Blue Valley Superintendent Tom Trigg knew they could do more to connect young people to meaningful work. His deputy Mike Slagle, now superintendent in Raymore-Peculiar, wrote the plan for CAPS. And Donna McDaniel, now educator in residence at the Kauffman Foundation, launched the program in 2008.

Six years ago, when McDaniel replicated the success of Blue Valley CAPS in the northern suburbs of Kansas City, Corey Mohn took over as executive director. Mohn’s background in economic development and entrepreneurship prepared him to continue to elevate the program and respond to national demand.

Shameka Montgomery has been a teacher and leader in the Little Rock School District for 20 years. As a teacher, she would see students thrive in career classes. Six years ago, Montgomery became Director of Career Development. Superintendent Mike Poore introduced her to the CAPS network and together they launched Excel Careers for Advanced Professional Studies which provide students opportunities to earn industry certificates and college credit.

Poore started the career-focused Ignite initiative in Bentonville where he was superintendent for five years before moving on to Little Rock.

Most districts that join the CAPS network don’t have a custom-built facility. Like CAPS Northland, they often rely on a satellite model with spaces and opportunities at business partners.

Little Rock was the first network member to run a hackathon. Shameka sees the program making a difference for students every day.

Key Takeaways:
[1:58] Shameka speaks about her history at Little Rock School District.
[2:20] Corey explains what profession-based learning is.
[3:50] Corey tells the origin story of Blue Valley CAPS.
[7:02] Tom gives a shoutout to Blue Valley’s founding director.
[7:50] Shameka shares what spurred her interest in a career in education as well as how she first learned about CAPS and professions-based learning.
[10:10] Corey reflects on his six years at Blue Valley and what first interested him in CAPS.
[13:51] Corey elaborates on what the impetus was for CAPS becoming a national network.
[18:08] Jessica shares an important resource with listeners: the Getting Through microsite.
[18:48] Shameka shares her insights on how their learning opportunities now are better for young people because of their CAPS affiliation, compared to five years ago.
[20:20] Would Shameka say that there are more young people in career education now more than ever?
[21:20] How many students take classes at the Little Rock Technology Park?
[22:00] Shameka elaborates on how the impact of being at CAPS is not only classes at the Tech Park but a change and expansion of the offerings at each of the five high schools.
[23:15] Corey shares how other school districts join their network and upgrade their career education through their affiliation.
[26:47] Shameka explains how and why this applied, hands-on, community-connected learning is making a major difference for young people in Little Rock.
[28:36] Corey shares what is next for the CAPS network.
[33:00] Shameka reflects on the downsides and benefits of working remotely currently.
[33:29] Tom thanks Corey and Shameka for joining the Getting Smart podcast! 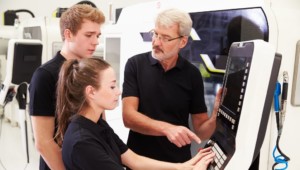