Street musicians—I have a warm place in my heart for people that have decided they must play music. I call them “can do no other” people. They found clarity, followed their passion, and hit the streets.

Is their pursuit of passion crazy or genius? A few are discovered and make some money. Some figure out how to turn busking into a business model. Most never make enough to support themselves.

When does it make sense to follow your passion? A new book, The Passion Paradox, tries to answer that question. Authors Steve Magness and Brad Stulberg say that just following your passion can be overwhelming, incomplete and ultimately, defeating.

They observed that passion fuels big accomplishments, but it can also be problematic. They share that, “passion and addiction are close cousins.” They explain that you must develop the right kind of passion: the kind that lets you achieve great things without ruining your life.

Malcolm Gladwell recently highlighted Howard Temin, a scientist initially shunned for his work on an obscure virus. His colleagues had long dismissed him as a heretic—until he turned out to be right and created the whole category of antiretroviral drugs.

So how long do you pursue your passion? LinkedIn founder Reif Hoffman often cites grit as one of the most important lessons for entrepreneurs, calling it “a key differentiating factor” between those who are successful, and those who aren’t.

But Hoffman resorts to nuance as well. “Hard work isn’t enough. And more work is never the real answer,” says Hoffman. “The sort of grit you need to scale a business is less reliant on brute force. It’s actually one part determination, one part ingenuity and one part laziness.”

By ‘lazy,’ Hoffman suggests “you want to conserve your energy to expend it on the right things.”

“You want to minimize friction and find the most effective, most efficient way forward. You might actually have more grit if you treat your energy as a precious commodity,” adds Hoffman.

All this advice still seems pretty nuanced. If you’ve ever closed down a business you were passionate about (like I have…twice), you know the decision is excruciating.

These questions situate your dilemma in a broader context of community and commitments. The Rotary four-way test is a reminder that it’s not just about you; it’s also about the circle of people invested in your success and wellbeing.

Another four-way test is the Japanese concept of Ikigai. It is a sense of balance at the intersection where your passions and talents converge with the things that the world needs and a willingness to compensate for them.

Adding the business model question is key: can I get paid for doing what I love? If, after a good attempt, you can’t answer that affirmatively, it is time to make that passion a hobby.

Figure out what you’re good at and what causes you care about. Look for ways to get paid making a contribution at that intersection. But it’s dangerous to be gritty when it’s not “fair to all concerned.” 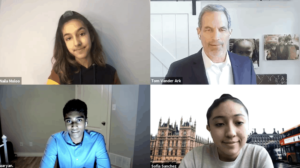