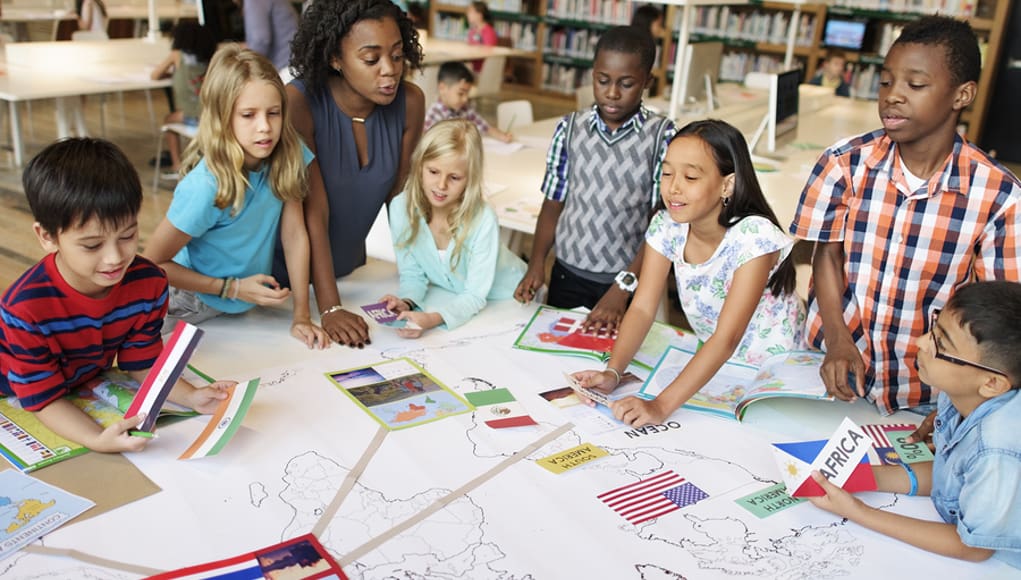 Twenty kindergarten students shout in unison, “Ours brun, ours brun, dis-moi ce que tu vois! Je vois…” Brown bear, brown bear, tell me what you see! I see… Their eyes are wide with anticipation as the teacher turns the page ever so slowly, and the children in the front eagerly try to peek around the other side of the page to see what’s next.

This is a typical morning at Académie Lafayette, a French immersion public charter school in Kansas City, Missouri. Founded nearly 20 years ago as the first charter school in the state of Missouri, Académie Lafayette is known for outstanding student achievement. Located in the heart of the city, their students are 34% minority and 21% free and reduced lunch. 99% of their student population does not speak French when they begin attending, yet their state test scores in reading and math are higher than any public school in the greater Kansas City area, including successful suburban districts. Their secret? Immersion.

“Our program is 85-90% immersion,” says Elimane Mbengue, Head of School. “French is the language of instruction in core subjects of math, science, language arts and social studies. Art, music, P.E. and computer classes are also taught in French. On state testing our students consistently outperform the district average, state average and surrounding suburban districts, in spite of being taught in French and tested in English.”

Brain-based research shows that learning requires more effort and focus when content is delivered in the target language. Multilingual students must practice focusing and tuning out distractions. This helps children develop a “clearer attention signal” and more efficient learning.

According to research, “The heightened monitoring of the dual language student… leads to greater cognitive strategies and recruiting additional neural tissue and greater brain density.” Adding a new language has been shown to increase mental capacity. Multilingual students literally have more dendrites available for learning.

Beyond obvious linguistic advantages, the immersion model of instruction fosters connections across the curriculum. Languages with Latin roots such as French and Spanish promote familiarity with vocabulary and concepts students will encounter in science, medicine, music, law and philosophy. Research shows multilingual students are able to better hypothesize in science.

Tom DeZutter, a 2013 Académie Lafayette graduate, scored a perfect 36 on the English section of the ACT. “We always had the best MAP scores in math and English,” he remembers. “At AL we learned to dig deep into everything, to expand our knowledge base beyond what is asked of us, not just learn enough to do well on a test.”

During a recent tour for local education leaders, guests asked student ambassadors Ayla and Jayden what they loved most about Académie Lafayette. Recess? No. Learning a new language? No. Jayden says, “What I love most about my school is my friends. We have fun together, we help each other, and I like seeing them every day.” Ayla’s story echoes hers: “On my first day here, I felt really nervous. I didn’t know how to speak French. But then I saw a friend from my neighborhood and they gave me a hug and said everything would be okay. I have lots of friends here now.”

Multiple studies affirm the self-esteem benefits of learning a new language, particularly for those students who might otherwise struggle in school, and have found that language students have a significantly higher self-concept than do non-language students. Again, Tara Williams Fortune’s summary of research finds that the benefits of foreign language study “reach across socioeconomic and ethnic backgrounds, as well as diverse cognitive and linguistic abilities.”

Abundant research demonstrates that second language study promotes cultural awareness and competency. According to this study, “in an age of global interdependence and an increasingly multicultural and multiethnic society, early foreign language study gives children unique insight into other cultures and builds their cultural competency skills in a way that no other discipline is able to do.”

According to the Center for Applied Linguistics, “The benefits of language study to society at large are many. Americans fluent in other languages improve global communication, enhance our economic competitiveness abroad, and maintain our political and security interests.”

Tom deZutter, the student mentioned earlier with a perfect 36 English ACT score, plans to get a master’s degree in engineering. When asked how he plans to use French in a scientific career, he had a ready answer. “Communicating with international scientists will be huge. This will be a team effort; this is everyone’s earth. Knowing another language helps you understand other cultures, teaches you how to respect differences, and helps you collaborate.” He continues, “I am very grateful that my parents took the chance to send me to this school,” he said. “I would not be who I am without it.”

Diane Balagna assists with admissions at Académie Lafayette as well as coordinating their student teacher program. Follow them on Twitter: @LafayetteKC ‏