Curriculum Associates may be the most important EdTech success story you don’t know about.

It’s headquartered in North Billerica, Massachusetts, not in Silicon Valley. The former workbook publisher has never taken venture capital, instead bootstrapping an adaptive learning business from scratch. In four years, the company has grown into a $190 million blended learning giant. They extended their impact exponentially while traditional publishers shrank each year.

In addition to a focus on student learning, Curriculum Associates was scaled with the intent to benefit nonprofit beneficiaries. Today we learned who that would be–the Iowa State University Foundation (ISUF) announced that Curriculum Associates donated company shares worth about $120 million to the university–one of the largest gifts ever given to a public university.

At a later date, ISUF will donate a portion of the proceeds worth about $28 million to the Boston Foundation to benefit charities in the Greater Boston area.

Founded in 1969 by a group of educators, Curriculum Associates established itself as a print workbook publisher. Among its notable early products was BRIGANCE, which blossomed into a comprehensive suite for early childhood, head start and special education programs.

The Curriculum Associates goal, according to Waldron, “is to make educators more productive…by making simple-to-use products that save teachers and administrators time, all while increasing student achievement.”

In building Curriculum Associates into one of today’s industry leaders, Waldron recruited a top notch team and created a world class culture (one recognized as a Boston Globe Top Employer for the last three years) where 94% of employees would recommend a friend to work there (compared to just 49% nationwide). We’re a “values-based company,” said SVP of Sales Woody Paik, “a company educators trust because of our transparency and hustle.”

Today, Curriculum Associates employs more than 650 full-time staff, over 20% of whom were hired in the last year. Of over 10,000 applicants in 2016, the company hired fewer than 2%, and Waldron interviews every final candidate before an offer is extended.

“I believe my greatest responsibility is ensuring we hire world-class talent,” said Waldron. “I make it a priority to interview every final candidate, even the summer interns, meaning I interview 300–400 people per year.”

This year’s bookings were $190 million, up a third from last year. The company’s year over year growth has far outpaced the average growth of competing major publishers as reported by the Association of American Publishers.

The secret, says Waldron, is having “the best people working together with shared values.” It helps to have a structure focused on long-term impact and public benefit.

The business success is based on a K-8 adaptive math and reading product called i-Ready. Independent research shows that students using i-Ready Instruction for 45 minutes or more per week grew 44% more than the average student in reading and 65% more in math. Launched in 2012, i-Ready today serves over four million students (about 11% of K-8 U.S. enrollments) – something no high profile EdTech startups have matched. Schools recognized the impact, and average weekly time on i-Ready is up 40% over last year.

Ready is a series of print classroom instruction books for K-8 reading, writing and math. In a study of more than a million students, proficiency rates for schools using Ready were 19% higher in reading and 24% higher in math. Many schools use a combination of i-Ready and Ready as a blended learning solution.

There are four remarkable things about this story:

A Harvard business school case study on the company gives learners an opportunity to explore “how a small or medium-sized privately-owned company can leverage its strengths and innovate while grappling with the challenges of providing software-as-a-service in the education sector, a leap for a company used to selling directly to schools and school districts.”

In order to fund university initiatives, ISUF will likely want to monetize the donated shares at some point in the next few years. A resulting management-led sale of the company will be directed by Waldron, who intends to find a socially-conscious investment partner committed to long-term impact and ensuring the company’s work continues. The Best Impact Story in Education Keeps Getting Better 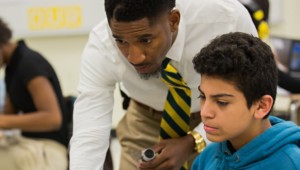