We’ve heard the story too many times – the kid who gets cut from a team never tries out again, or worse, shies away from physical activities altogether.

How about writing a different ending to that story – one that is actually a beginning? Tony Schiller did. He was cut from seven different teams as a kid only to become a six time World Triathlon Champion and a finalist for USAT’s (USA Triathlon) triathlete of the year award.

Tony and his colleagues wanted to make sure all kids had a chance to enjoy physical activity so they founded Cycle Health and the BreakAway Kids Tri. They are partnering with schools, families, foundations, and pediatric clinics to make a difference.

In doing so, they urge kids to be active, help others, and prove to themselves what they can do. Most kids (some with adaptations) can participate in swim, bike, and run events where it’s not about “who got picked,” instead it’s about “personal best.”

It’s hard to find many more authentic ways to teach a growth mindset. Health and fitness teachers (and governing bodies such as SHAPE), parents and administrators should take note.

While I’ve done a few triathlons myself over the years (don’t ask me about the time when I was in my 20s and got passed on the bike by a 75 year old), it was even more enlightening to step back and reflect on this process as a parent while watching our eight year old participate in the BreakAway Tri. 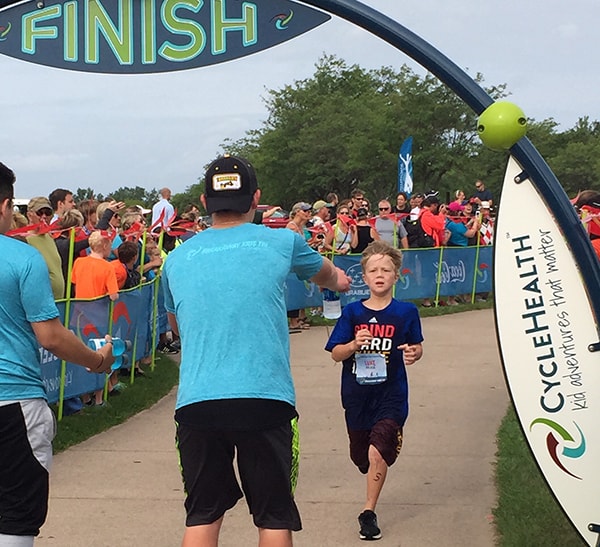 One of the featured speakers at that tri was 91 year old triathlete and double Purple Heart recipient, Bob Powers. In his words, “Through a tri, you get to have fun, be healthy, be a better student, and get off of a screen.” We’ll unpack each of those and a few more. Through a tri, kids can learn to:

Given these benefits and more Cycle Health co-founders Tony Schiller, Betsy Grams, and Mark Walinske now have a vision to partner with schools. If you are in the Twin Cities, consider reaching out to them to build the benefits in school environments.

If you are elsewhere, find a local triathlon or start one of your own. It doesn’t have to be complex to make an impact. Schools can do this as part of PE classes. The PTA could sponsor the event and turn it into a fundraiser. Neighborhoods can organize one as well.

Why stop at the kids? Let’s all try a tri.