Preparing for Conversations with Parents first appeared on CompetencyWorks.
By: Chris Sturgis (@sturgis_chris)
Sajan George, founder of Matchbook Learning, kicked off a rapid fire email exchange that produced some incredibly helpful ideas about how to tell parents for the first time that their child is on a different academic level than their grade level.
Sajan’s original quest was to learn from other education leaders who had successfully explained to parents the Two Big Whys:

If the student is substantially behind, teachers will have to be ready to answer a third Why:

Copper Stoll, now co-founder of a consulting firm Don’t Ever Stop! offered some helpful guidance based on her experience as Chief Academic Officer at Adams 50:

The spring before we began our K-8 competency-based system, we dedicated a day to meet with every parent to inform them of their child’s placement in ELA and Math for the following year. The first thing we did is to personalize the conversation by providing folders that included information on the standards that their child would be learning, based on the student’s academic placement, as well as brochures that explained the personalized mastery system. This laid the groundwork so that parents wouldn’t be surprised if their child were placed in an academic performance level that is below their chronological grade level in the coming year.

During the first year, we maintained a quarterly reporting system that parents were used to and created a standards-based report that was close to one they had seen previously. We gave each parent a password to their electronic grade book so they could access it 24/7, allowing parents to gradually become accustomed to the new reporting system and the performance level of their child. We also provided teachers with talking points so we would have a consistent message across the district.

Parents didn’t express any concerns, as they knew their kids were behind and they were grateful that we were finally doing something to address it!

Stoll closed her emails by emphasizing the importance of designing instruction and supports to move students up quickly to grade level on the essential standards of the Common Core so they don’t aren’t working below their grade level indefinitely.
George also touched base with Ephraim Weisstein, co-founder of Diploma Plus and Schools for the Future, for his insights from a secondary school perspective into this challenge. Weisstein laid out two principles for helping parents and their students appreciate the value of a competency-based education:

Weisstein pointed out that the conversation starts at orientation and continues as an ongoing part of a competency-based school. Admissions and orientation are the first opportunities to introduce parents to the culture of a competency-based school, with an emphasis on personalized learning based on where students are in their learning. Weisstein emphasized that conversations with parents and students about learning, progress, and pace are also important parts of retention strategies. Teachers may start conversations with parents and students with specifics of current learning, progress, and growth targets, but will want to engage them in a discussion about the bigger picture, as well. The bigger picture includes discussions about high school graduation, what college and career readiness means, skills needed for family-wage jobs, what skills students are expected to learn in the school, and options for students as they build and apply their skills on the way to graduation. It includes practical incentives, like being able to earn college credits, networking with employers, and building a résumé while still in high school.
That said, there is a potential trade-off that some students and their parents must choose—graduating earlier or spending more time to graduate with stronger skills. This is particularly important choice for students who are closer to graduation, having already earned many credits but with skill levels that are still low.
If you have learned about how to design and sequence your conversations with parents about their children’s academic levels, pace, and progress, please let us know. Please share your story and resources in the comment section.
For more on parenting and teaching, see: Insight from the Great Learning Conversations: 8 Ways Parents Want to Connect With Schools 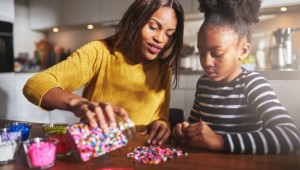