My wife has been waiting for this day for two years. Her iPhone 4 is limping along and she’s ready for an upgrade. Apple unveiled its iPhone 6, iPhone 6 Plus, and Apple Watch to a friendly crowd in Cupertino this morning.
The new iPhones come in two sizes: 4.7 inches and 5.5 inches. The larger iPhone 6 Plus starts at $299, while the iPhone 6 starts at $199. The devices come in gold, silver, and space gray. They’ll both start shipping on September 19. iOS 8 update comes out September 17. The price of the iPhone 5s will drop to $99.
Tim Cook called the Apple Watch the “most personal device ever created.” The device is navigated using a “digital crown,” a button on the right. The Watch can communicate with other Apple Watch wearers. Users can interact with notifications from third-party apps, like Twitter and Facebook, or get directions using maps.
Apple Watch is designed to work with iPhone (including iPhone 5). A popular combination will be the larger iPhone 6 and the Watch.
As you’d expect from Apple, the Watch is beautifully designed with attractive straps and an interesting initial array of apps. The charger fits on the back of the Watch, it doesn’t require open contacts.
Product lead Jony Ive said, “You can’t determine the boundary between the object and the software. For example, a taptic engine on the back of the phone will tap your skin to provide walking directions.
A gyroscope and accelerometer power a pretty cool fitness app that will compete with current activity monitors. You’ll know more than you ever wanted to know about your fitness routine (or lack thereof).
Pay will prove useful–perhaps it will help the US catch up with Europe on fast secure payment (see this First Analysis post for more). The big announcements of the day–bigger phone screen, Watch and Pay–all reinforce the fact that Apple is a consumer electronics company.
Biz Tools & Schools. What does the announcement mean for business and education? Not much. I’d be happy if Apple skipped a phone update and worked on a decent CRM–they just don’t seem to pay attention to basic business tools like relational databases.
It’s a good thing that most school districts have dropped their cell phone ban. An expanding array of wearable technologies–watches and glasses–means there will be more technology walking into classrooms. Teachers that find ways to harness that technology will often see great benefits.
While not inexpensive, the Watch would be a pretty cool app to power a high school or college fitness class that encourages students to develop personal wellness plans.
In the last week, we also saw Google launch a new edu blog. Along with Drive, apps, Classroom, Play, and Chromebooks, it suggests Google finally taking the education vertical seriously. However, the announcement today makes it clear that Apple remains a consumer focused company. Will you be joining my wife in line for Apple’s newest products?
Photo credit: Justin Sullivan, Getty Images 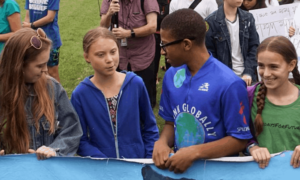