We’ve known for several decades that there is a critical period for learning language: children are more likely to reach native (or native-like) fluency in language(s) that they learn before age 5. (The exact age and importance of this window is not written in stone.) The good news is that the benefits of learning a language do not disappear after age 5. A recent deluge of studies point to interesting and encouraging links between learning languages and the brain.
A recent collaborative study found that “the pattern of brain development is similar if you learn one or two language from birth.” But that if a new language is learned later on in childhood – after children are proficient in their native language(s) – the brain does change. Areas of the brain involved in functions such as “thought, language, consciousness, and memory.” The study found evidence that learning a new language after the so-called critical window “stimulates new neural growth and connections among neurons in ways seen in acquiring complex motor skills such as juggling.”
So if you find learning a new language challenging just remember – learning to juggle is challenging, too, and they both stimulate brain growth. Or, you maybe you just need to work on your pattern recognition. A recent study that investigated why some people are able to pick up new languages easily while others struggle suggests that there is a link between learning a new language and the ability to “pick up on statistical regularities” – to recognize patterns. Students who volunteered for the study were tested for their ability to pick up implicit patterns in a stream of complex shapes. Students who performed better on these tests also performed better over their next two semesters learning Hebrew.
There’s more good news: “Fun activities can improve language learning,” according to another recent study. “Playing simple games using words and pictures can help people to learn a new language with greater ease.” The study also suggests that casual exposure to a new language – such as watching movies or listening to words, even while not trying to learn the language – help later, deliberate attempts to learn that language.
And let’s circle back to babies. An interesting study found that “children hear more complex language from parents when they read a storybook with only pictures compared to a picture-vocabulary book.” The study looked at a group of mothers with toddlers, some of whom read to their children from a wordless picture book and some of whom read to their children from a picture book with text. Mothers who read from the wordless picture book tended to not only tell a story, but expand on it and say things like “Where do you think the squirrel is going?” – in contrast to mothers who read from a picture book with text. 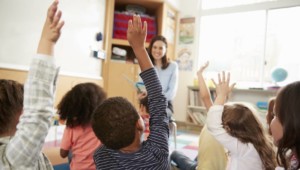