I remember two things about 1969: Neil Armstrong landing on the moon and the Zenith TV that my family watched it on. Both were technological wonders. We all know about the moon landing, and we grieve the passing this week of Neil Armstrong. Armstrong wasn’t just an American hero, he was an Earth hero. Definition of icon.
Let me fill you in a bit on that Zenith TV, though. This piece of technology was pretty important in the whole Armstrong iconization. It had a knob, like a door handle knob, to turn the channels. We only had four channels, but we wore out that poor knob. We eventually had to use a pair of pliers to turn the channels. Zenith, with a factory right in my outback Indiana town, studied its users (probably after a few kids had been zapped while turning channels with a pair of pliers). Soon that knob was replaced with push buttons and then a NASA like remote. Zenith adapted to us. They didn’t just tell us to “turn the dang thing this way.” They knew their audience.
That Zenith TV and all others like it were an important piece of technology. I’m from that TV generation, and we all became great consumers of information, mostly spewing out of the TV or off the big screen. Technology wasn’t stopping with the TV, though. You’re no doubt familiar with the advances that the space program brought us. Satellites defined “live” TV, weather forecasting, and GPS on our phones. Plus fuel cells, health monitors, robotics, and laptops, but what all these lists miss is the one essential thing that the space program brought us: DREAMS.
It became the catch phrase. “If we can put a man on the moon, we can ___ fill in the blank ___.” As you know, technology and innovation exploded after that, but are we still inspiring our kids to the same today? Can we even possibly do that? In the 60s, we put a man on the moon. Today, we can’t seem to repair our bridges.

NASA and the moon landing were obviously technology driven. While we’ve made tremendous strides in our schools with technology, we’ve also delivered confusing messages to Generation Z about using technologies. Outside of school, students connect with some sort of iWonderful device and explore, play, learn, consume, connect, and create for endless hours at a time. All on that on some “rectangle with rounded corners.” At school, though, we have them put that all away. We’re familiar with principals who collect smart technology from students at the doorway.
It was five years after watching the moon landing when the first TV was delivered to our classroom. We were all stunned. It was joyous. That piece of magic that was in our living rooms was now in our classrooms. Why didn’t someone think of this sooner. The community, though, welcomed it as much as Hester Prynne leading a class at Vacation Bible School. It was a thing of EE-VIL. We would surely be watching game shows and soap operas all day.
Smart technologies are facing some of the same growing pains. I was recently at a meeting of statewide educational leaders, and virtually everyone had some sort of smart technology, and they all agreed that it was indispensable for their work.

We know how the young are connected to their smart devices. Here are kids at a recent concert. It’s a whole new scene.

So educators rely on smart devices and students use them everywhere . . . except the classroom. I think the scene is changing there, as well. Hopefully we are at the end of the technology witch hunt era. My daughter’s going into the 8th grade, and at her school’s open house last week, her math teacher asked, “Do you have a phone? A smart phone? Well, bring it every day. We’re going to use it  every day.” My daughter looked like she just won backstage passes to a Pierce the Veil concert. If a 12-year-old is still talking about your classroom plans the next day and calls it “cool,” you’ve struck a chord.

Hopefully you’ve integrated technology into your classroom, and ideally your school and district have helped facilitate that process. The most exciting thing you can do with this technology is to move your students from consumers of information to creators of content. Tony Wagner explains why in Education Week:

“What matters today, however, is not how much our students know, but what they can do with what they know . . . . Because opportunities for learning are ubiquitous and accessible on every Internet-connected device, students who know more than others no longer have a competitive advantage.”

It’s certainly time to usher in more “doing.” Project based learning might be harder to grade than a bubble sheet, but nothing can replace the creation of that authentic product. It reminds me of this quote:
In school they will teach you a lesson and then you will take a test. In life, you will be given a test and then learn a lesson.
We can be in the creation business, too. Not only should be be pushing our students to do that, but we should become content creators, as well. We can contribute to that knowledge graph on the Internet. You’re not just a math teacher, you’re a mathematician. You’re not just a journalism teacher, you’re a journalist. If there’s no better way to learn something than by teaching it, then we’ve got a lot game to bring.
Technology has put creation tools at our fingertips, most of it free. For about the first year, I used my iPad to consume media and connect with friends. I must have watched a thousand hours of video and read blogs and news sites. I tweeted a lot and connected on Facebook and LinkedIn with fellow social media warriors. But I was really missing out on the iPad’s true potential. This wasn’t just a Zenith TV on a telephone. I realized what a powerful creation tool it was. I started to organize it in a way that led me to creation first.

I resisted the urge to just consume and connect. I tried to hit that first folder as often as possible, and I slowly built up my toolbox with the right apps for creativity.

Teachers are creating content for their classrooms, and many of those teachers are sharing it on the web. I encourage you all to do the same. Districts should set up portals where teachers in specific disciplines can share with one another. It’s kind of crazy that maybe only 30 students in a district of 30,000 get to see the best teacher-created content.
Join any of the sites online where teachers can contribute lessons. You’ll take some and you’ll share some. Sharing content is one thing, but you should also share your ideas. Be sure to follow #edchat on Twitter and network with like-minded educators.
Be a creation-production model for your students. Trust me, they know if you are or not. If you’re using a textbook company’s transparency from 1998, the students know what kind of teacher you are. You might be great, but you’ve not exactly embraced the future.
I’m not sure when the disconnect from the real world happened in schools, but somewhere we replaced “doing” with “testing” and believe that testing is either more important, must come first, or can’t happen at the same time as “doing.” The first time a kid said that his DREAM was to score in the top quintile on a standardized test, that was when we became the dystopian, near-future, cold world where dreams die that SyFy movies have been promising us since the 1950s.
We need to do something to kickstart that dream for young people or sustain their dreams like this genius startup company. They will work hard beyond belief when it’s something authentic that they believe in. I leave you with this video from Ne-Yo, graduate of a public magnet school in Las Vegas.

We need to be in the opportunity business.
Day and night. Everyday of the year.

Links to Extend Your Learning 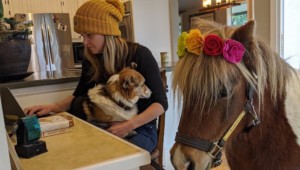 The Power of the Pivot