The fight over parent choice vs. district control in the Tar Heel State

North Carolina is host to the latest battle over expanding digital learning, charter schools, and parent choice.  It involves attempts by the State Board of Education (SBE) and the NC School Boards Association to block a proposed online public charter school, North Carolina Virtual Academy (NCVA) from serving students this Fall. Yet, beyond the details of this one new charter school, this issue has sparked a renewed debate over governance, and whether the principal virtue of “local control” in education is district control or parent choice.
First, how did we get here?

In 2011, following a contentious debate, the NC Legislature passed a bill lifting the cap on the number of public charter schools allowed in the state.  Charter advocates pushed for an independent Charter School Commission, but that was vehemently opposed by Governor Perdue and her allies and ultimately removed in order to secure final support.
The law in North Carolina did not prescriptively select certain schools or pre-determine what types of charter schools could apply. The charter school law was designed to invite a range of innovative and high quality school models that could meet the unique needs of a diverse student body across the state.
While the 2011 bill lifted the cap, the state’s longstanding charter school law always authorized three entities to review and give preliminary approval to charter schools:  local boards of education, The University of North Carolina, or the State Board of Education.  The State Board is the sole authority to grant final approval of all charter schools.

In November 2011, North Carolina Learns Inc., an independent nonprofit charter school board, submitted an application for an online public charter school to Cabarrus County School District for preliminary approval.  After a thorough review and scoring of the application against the statutory requirements, the Cabarrus County School Board gave preliminary approval for the new charter school in January 2012.  The new online public charter school proposed to use the curriculum and academic services provided by K12 Inc.
Under the law, the application then went to the SBE for final approval.  State charter school law requires that the SBE “shall act” on charter school applicants submitted to them by a defined date (March 15).  However, the SBE chose to not to act on the charter school application, thus leaving NC Learns’ application in a state of perpetual limbo.
The SBE claimed the reason they did not act was because they needed more time to study online charter schools, prompting one NC commentator to say that the SBE was “making up the rules as it went along.” In fact, SBE has claimed for nearly a decade that they need more time to study online schools, despite the fact that online schools have been operating since 2000 and are currently in over 30 states.

Administrative Law Judge rules against State Board of Education

In May, an Administrative Law Judge ruled that the SBE’s failure to act and follow the charter law was “arbitrary, capricious, and an abuse of discretion.”  The judge also rejected the SBE’s argument that the Board took official action when its chairman said last year they would not review any online charter school applications. The SBE held no vote on the matter.

Following well-established North Carolina precedent on the failure of a regulatory agency to act in a statutorily prescribed timeline, the judge ruled that because the SBE failed to follow the law it lost jurisdiction over granting final approval of North Carolina Virtual Academy.  The judge recognized Cabarrus County Schools’ approval of the charter application and deemed the charter school approved under state law.
This has not stopped the SBE.  Joined by the NC School Boards Association and the left-wing group NC Policy Watch, the SBE is continuing to pursue legal action to block the charter school from opening and serving children.  A hearing occurred earlier this week and a decision by an appeals court judge is expected on Friday, June 29.
These groups have also engaged in a statewide PR campaign in an effort to discredit multi-district online schools and specifically target K12.  They’ve complained about funding and costs for online schools despite reports showing these schools cost around $6500 per student (near the same amount NC online charters would receive), and the fact that online schools receive on average 30-40% less in total public funds than traditional schools.  They’ve argued about academics, but ignore evidence showing strong student performance, data indicating academic gains, and strong performance by a number of individual  online schools.    Ironically, some have even argued that teachers cannot effectively deliver instruction online even though online instruction has been used for years in North Carolina’s own state-run virtual program, NC Virtual Public School.

Parents or school districts:  Who should govern the child?

Online schools make a valuable contribution to public education.  For many kids, they are essential, and sometimes the only way for students to get a high quality education.  This is why parents want school options and the freedom to choose.  They know that every child is unique and has different needs.  And, like all education models, online schools work well for some kids but not for others.  Likewise, some schools will perform better than others; not every charter school will succeed, nor should every applicant be approved.   But what is so frustrating to parents is when charter schools are denied (or, in this case, ignored) solely because they are deemed too disruptive to a system reluctant to yield control and power.
Policies on school finance and accountability for all schools — traditional and charter; brick & mortar and online – are important and worthy of research and debate.  Education reformers support quality and accountability.  However, as is happening in NC, critics will happily raise these policy concerns only when the subjects are charter schools and other schools of choice.
At its core, the debate over this one new online public charter school in North Carolina is really about the fight over governance, and who should control the education decision of the child:  school districts or parents.  It’s the latest episode in a familiar storyline we’ve seen play out over 20 years since real, parent-driven school choice first emerged and began to shift the paradigm. 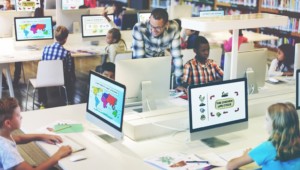 Time to Redesign is NOW Hey Jeff,
Stop the pretense of "objectivity". Your piece reflects the bias of your funders. Whether you personally believe in this nonsense or not, I have no way of knowing. But it's clear what's really going on.
Are we supposed to swallow this nonsense?
"Parent Choice vs. District Control" Gee, I don't know, Jeff: Maybe the answer is "Whichever one makes it more likely that we can get rid of public schools and replace them with private businesses that call themselves "schools" and end up slipping public tax dollars into the pockets of shills and con artists."
Is that it, Jeff?

Bonnie, most states offer full time access to multiple providers of online learning, even my home state of WA (where we don't have charters) has a rich mixture of providers that contract with districts (as was proposed in NC). Why should families be stuck with the school down the street, particularly if it's low performing? We think families should have access to a variety of full and part time options.

Why is it that I can walk into any shoe store and find my very own size, preferred color, and style, but as a parent I have no voice or choice in my child’s education? I personally feel my child’s future is far more important. Since my tax dollars go to public education, shouldn’t I have some public school options? Traditional schools serve a great need., but some families want or need something different. What is so wrong with that? Why not offer something for the children of NC other than the status quo…or are we completely satisfied with the status quo? Tell me, what is the SDE and other opponents of this school so afraid of?