Howard Fuller steals the stage this morning at the NewSchools Venture Fund (NSVF) Summit in San Francisco California this morning as he candidly makes hard hitting points on the importance of saving the lives of children today by rethinking a broken system of education. He says, we’ve come a long way, but we have such a long way to go. “We should claim no lies or easy victories as we move forward for our kids,” says Fuller.
Fuller brings enthusiasm as he says, we need to fight for the welfare and future of students today. “I think we’re in a street fight. Yet, many of us in this room approach it as if we’re in a college debate,” says Fuller. He argues that we should embrace tough action items like parent choice rather than run from it. He says, the education debate is more than poverty and funding, it’s also a class and race issue.

“We need systems where regular people can get awesome results,” says Fuller.

David Domenici responds, we need to scale the fence topped with barbed wire in order to improve the education of our youth in detention centers. He argues that we need to keep these students in mind and educate them from behind the fence. “We need to break the cell blocks,” says Domenici. He argues that tech entrepreneurship needs to expand markets to the students that are in our detention facilities and in some of the most impoverished schools in the nation. Lastly, Domenici says to engage students and make them a part of the school community rather than expel them where they’re one step closer to a detention facility.
Prior to Howard Fuller’s speech, Laysha Ward of Target and Ted Mitchell of NSVF opened this morning’s summit with an air of change and fight on the education horizon. Ward discusses the ways in which retail giant Target is giving back to education to build our future economy and democracy. She says, we are in the position to improve education, but we cannot move the needle alone. She invites partnerships and collaboration between businesses, entrepreneurs, teachers, policymakers and more to improve education with a student-centric vision.
Mitchell speaks to the importance of education in loosening the grip of poverty in America. He reports, one in five American students are living in poverty. He also emphasizes the importance of teachers in generating allies to move the needle of education. He says, we need to support the movement of education and the demands of teachers by creating innovations and disruptions that promote personalized and adaptive learning. Its through technology, innovation, entrepreneurship and more that we begin to change education and diminish poverty.
Overall, the panel and keynote this morning brought passion to the stage about the future of education, touching on the following themes: 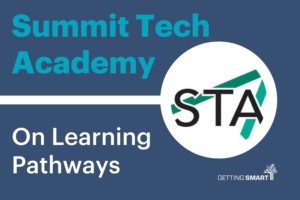