Fifteen years after introduction, more schools are taking standards seriously–not just taking tests seriously but standards in every day instruction and feedback to students.
“Over time, we began to realize that many teachers had been grading kids for compliance — not for mastering the course material,” a Minnesota principal said. “A portion of our A and B students were not the ones who were gaining the most knowledge but the ones who had learned to do school the best.”
Peg Tyre’s NYTimes contribution No More A’s for Good Behavior looks at standards-based grading.   She asks, “Should students be rewarded for being friendly, prepared, compliant, a good school citizen, well organized and hard-working? Or should good grades represent exclusively a student’s mastery of the material?”

For Sandra Doebert, a superintendent who oversees a high school with 1,500 school students in Lemont, Ill., a middle-class suburb southwest of Chicago, the answer is clear. “In this age of data and with so much information available to us we can no longer confuse how students act with what they know.” She, too, is revamping the grading policy so that grades reflect subject mastery, not compliance.

No brainer, right?  When I tried this as a superintendent three years after Washington state introduced standards, I received a vote of no confidence from the staff and uproar from parents.  They wanted grades back.
This all gets a lot easy after schools shift from print to digital and when every instructional experience incorporates instant standards-based feedback–controversy over.  Then we can make real the axiom, time is variable, learning is constant.  The idea of retention will fade as the system becomes more responsive to individual student needs with differentiated pathways.  Read more about this in a great iNACOL report When Failure is Not an Option: Designing Competency-Based Pathways for Next Generation Learning (discl: I’m a director). Here’s a summary:

Competency-based approaches build upon standards reforms, offering a new value proposition for our education system. Frequently, competency-based policy is described as simply flexibility in awarding credit or defined as an alternative to the Carnegie unit. Yet, this does not capture the depth of the transformation of our education system from a time-based system. Competency-based approaches are being used at all ages from elementary school to graduate school level, focusing the attention of teachers, students, parents, and the broader community on students mastering measurable learning topics.

Here’s a great closing summary from the Oregon Education Roundtable, “In a proficiency system, failure or poor performance may be part of the student’s learning curve, but it is not an outcome.” 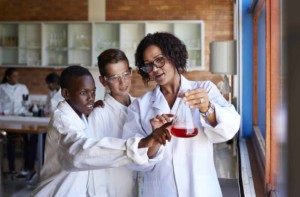