Rather than building a forward leaning argument, Clay Shirky used the printing press as his analogy–it made society better, so will the Internet. He failed to mention innovations like iGoogle which delivers a tailored newstream to my desktop. I know more about the world 5 minutes after I wake up than I did after a week of periodicals 10 years ago.
Nicholas Carr suggested that the Internet is turning us into shallow thinkers. At least for those of us half awake, this is a silly argument. He defends his point with a ridiculous Cornell study that compared two groups of college students; one group paid attention to a lecture, the other half web surfed. When post tested–surprise–the web surfer did worse, so obviously computers and the Internet are bad. The real test would be between an online or blended course and a lecture course. And in fact, the Department of Education’s meta-study of 51 research projects found that students learn more online.
Mr. Carr, speaking on behalf of the half awake, we are learning more and faster than ever. We know more about the world, we write more, we interact with a much wider and more diverse group of people, and we’re more productive than humans have ever been.
It’s disappointing that 20 years into the Internet age, our formal education system has changed so little, but things are about to get interesting. In the next three years, we’ll see the introduction of personal digital learning tools that will finally put this silly argument to rest.
In the meantime, there’s no turning back the clock. Banning phones and computers from schools that haven’t figured out how to use them will soon come to an end. The formal education system will eventually join the 21st century and make use of the Internet and the amazing apps being developed everyday. Every Student Needs a Learning Coach 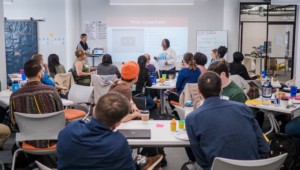