There are about 10,000 really bad schools in America.  The majority are elementary schools.  We know how to make them better, but it takes political will and capacity to improve them.  We know less about turning around bad secondary schools.  The one thing wrong with them is everything.  That makes fixing them really hard.
Here’s the best three school turnaround strategies:

The big federal grant programs (RttT, School Improvement) don’t give much credence to a systemic reform strategy like trading bad seats for good seats.  The grant programs are specific about actions at individual schools.  That will force a lot of close/replace (called restarts in the SIG grants) and turnaround attempts.
If restarts are the best grant supported option, the next problem we need to deal with is capacity.  There are about 80 charter developers that can open 200 schools per year.  Even if they could open 300 schools a year that’s hundreds short of what’s needed to replace the thousands of failing schools.  And most of charter operators focus on urban center, what do we do about failing rural schools?
The answer to the turnaround capacity and rural question is blended restart charter management organizations (BRCMO) that combine the best of online and onsite learning. Most of these blended schools would use an online curriculum as core and would supplement with projects, community connections, tutoring, guidance and extra-curricular activities..  Here’s five reasons that BRCMOs make sense:

State charter school authorization processes are not well suited to BRCMOs.  Other than Arizona, they don’t allow private providers to apply.  Most discourage multiple applications.  All require a drawn out application process (like 18 months).  For the purposes of RttT and SIG supported efforts, states will need a streamlined restart process.
Despite all of these challenges, BRCMOs could open 100 schools in September 2010 and more than 200 in September 2011.  BRCMOs will be a big part of the turnaround solution if states make it happen.

Getting Smart Podcast | The Future of Blended Learning 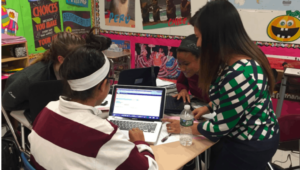 I'd like to pick your brain further.
The RttT guidelines don't seem to allow closing schools and presumably swapping seats like you describe, except in extenuating circumstances like being a rural school. In my city, we are maxed out on charters. Would that count as an exceptional circumstance?
RttT is supposed to include unions. But when most of the 5% of the toughest schools are in the one or two urban areas, systemic reconstritution would be a mortal threat to unions. (our union represents the city, while the NEA is stronger in the subburbs where they aren't at risk.)
Also, why not limit the RttT turnaround requirements to elementary? Why go down the road towards mandates for secondary schools when we know almost nothing about improving them as opposed to improving schools that cream?
This is especially true in my city where more than a third of schools are selective charters or magnets, and they are disproportionately in secondary schools. I can't imagine many charter operators wanting to take on the challenge of my school after the more easily educated students have been creamed off.

It's the School Improvement Grants that require school specific intervention.
I think you'll see RttT reward statewide systemic reforms not just checkbox responses.
RttT is (in part) an opt in approach. I've seen a number of states slow down aggressive accountability measures to build more support--something that will have long term benefit. CO has probably done more RttT outreach than other states.