For someone particularly interested in education and its role in our society and economy, I’m trying to figure out whether the stimulus bill and a hard charging Secretary of Education will produce any real progress.

Having grown increasingly concerned about our diminishing civic problem solving ability, I’m also trying to figure out what kind of dance we’ll see between White House and the 111th Congress. Brooks draws some conclusions from the recently passed House climate change bill:

All of this has produced a ruthlessly pragmatic victory machine. Last week Democrats were able to pass a politically treacherous cap-and-trade bill out of the House. The Democratic leaders were able to let 44 members vote no and still bribe/bully/cajole enough of their colleagues to get a win. This was an impressive achievement, and a harbinger for health care and other battles to come.

Brooks goes on to predict that we’ll see more legislative pragmatism than policy pragmatism (i.e., bills that can pass over policies that work). The “victory machine” bodes poorly for the use of stimulus funds to produce real reform and for a thoughtful reauthorization of the Elementary and Secondary Education Act (ESEA, what Bush called No Child Left Behind), the bill that doles out billions of federal funds and provides a minimum guidelines for state accountability systems. Brooks concludes, “When the executive branch is dominant you often get coherent proposals that may not pass. When Congress is dominant, as now, you get politically viable mishmashes that don’t necessarily make sense.”

Obama seems to be giving Duncan more leash than other secretaries. Sibelius is laying low while congress engages in a public-plan food fight. Duncan, on the other hand, is traveling the country speaking forcefully about closing schools and opening more charters. Perhaps Duncan will be able to maintain tough grant criteria for the remainder of the stimulus funds, but I suspect the Brooks’ calculus will rule when it comes to reauthorization.

If so, the implications include the following:

1. It’s vitally important for the ‘reform’ voices to learn to work together. Right now the status quo and distracted politicians have little interest in a change agenda. Human capital (e.g., TFA), charter, and gap-closers, with support from the business lobby, need to get their act together—and push.

2. Pay attention to key congressional races. Democrats courting teacher votes in 2010 will be under pressure to gut accountability provisions from ESEA reauthorization. Groups like Democrats for Education Reform and Education Equality Project that put kids ahead of adult interests will play a pivotal role in keeping a reform coalition together in congress.

3. Do the right thing locally. All education is local—at least in America. Perhaps the most important thing each of us can do is to support aggressive gap-closing school improvement efforts in our own neighborhood. Support a charter school or a mentoring program. Get involved in a school board race.

I’m not always in a good mood after a Brooks column, but I’m a little clearer about what to do next. 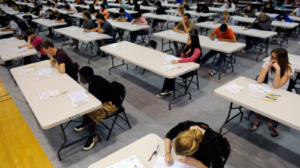