“We talk about consumers and producers. In much of education, the student is a consumer. The Changemaker movement has helped us to help teachers help students become producers.”

Eighty percent of the best jobs of tomorrow do not exist today. And increasingly, social problems are outrunning the solutions. We can see that in all aspects of human life – from climate change to unemployment to racial inequality. We are living in a world where change has become the only constant.

In such a world, the art of changemaking–or working empathetically with a team to solve a community problem–becomes essential. When children and adults master the skills of empathy, teamwork and leadership to solve problems which they care deeply about, they are realizing their own power to catalyze change; learning that the status quo can be challenged, and discovering that our collective success increasingly depends on our individual strength as change agents. Over a one-year pilot, we identified 40 teachers who were exploring the next phase of their own leadership in the school.

We took them through a professional development process that introduced them to the Changemaking Education Framework and invited them to co-create ideas to integrate changemaking into the K-12 STEM curriculum.

The challenge was to create opportunities for students to solve problems in their community which were important to them, using the STEM & English language concepts they learned in the classroom.

The problem troubling students Ryan Johnson, Ethan Haas, Elija Thompson and Drew Rulo was water pollution in the Chesapeake Bay–an issue very close to home as their school is near Marley Creek and the Severn River on the Chesapeake Bay. Through the Changemaking Education Framework, the team designed a solution called “RO-BOATS.” They fastened a net to the back of a model boat that, in theory, would collect trash from the water’s surface.

Initially, the net was sinking and closing up, making it unable to pick up any flotsam. To solve this problem, they added weight to the bottom of the net that forced it to expand, as well as flotation devices to the top that kept it from sinking. The team enjoyed the opportunity to investigate and modify pre-existing technology to benefit their community. The boys focused their passion for outer space by building a portable planetarium and developing a short multimedia show about stars. Their goal was to promote a greater interest in space among younger students by creating a planetarium program that could become part of the school STEM program.

With the support and guidance of the Johns Hopkins University Physics and Astronomy Graduate Student Program (JHUPAGS) the boys built and developed a program using blueprints and open source software recommended by the JHUPAGS team.

A long range goal for Team SASP1 is to pass on excitement and enthusiasm for possible careers in space exploration, so these students (now high school students) continue to return to Old Mill South to groom the next middle school teams developing new presentations involving future Mars explorations.

Kristina Gillmeister, STEM coordinator for Anne Arundel, believes the interconnection of changemaking and STEM empowers students to see themselves as change agents in the now, and provides them with the skills and dispositions they need to create real and lasting impacts. Buckminster Fuller, a famous STEM-ist, tells us, “You never change things by fighting the existing reality. To change something, build a new model that makes the existing model obsolete.”

While we are preparing students for life, they are busy living it. Building a new model where the inherent connections between STEM and changemaking are made explicit, creates a powerful framework for education and life – in the current world and the world our students will lead.

Click here to read more about the #LeadYoung initiative, contact me to learn about becoming a Changemaker district and be sure to check out the video below to learn more about changemaking: 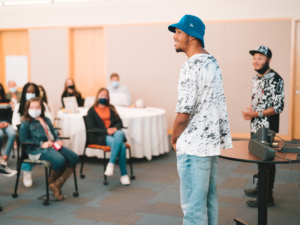 How Design Thinking Is Preparing Young People to Lead

Empower them with the skillsets and mindsets of creativity! The “Why” of our Creativity Crusade!